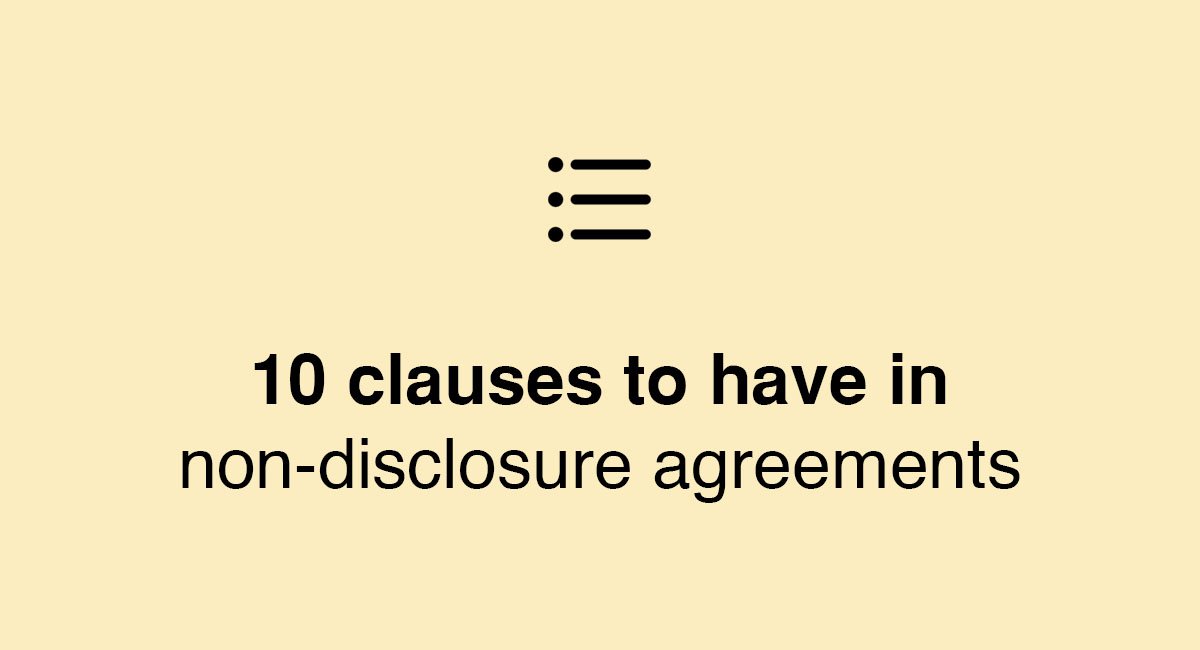 Non-disclosure agreements (NDAs) have become so commonplace in business transactions that they almost seem generic and clichéd, causing many business professionals to neglect their true significance.

To make matters worse, of those who want to use one, few understand how to do so correctly so the drafted agreement often ends up being weak and ineffective, if not worthless and outright void.

Despite its bad reputation, however, an NDA is a crucial legal document, essential to the protection of any legitimate company or business owner. In fact, neglecting to implement this kind of well-written legal agreement can cause your business considerable harm.

In an effort to bring some love back to this overlooked and habitually misused agreement, we’ve taken the liberty of highlighting its importance here and revealing the 10 key clauses needed to make your non-disclosure agreement worth more than just the paper it’s written on.

10 clauses to have in Non-Disclosure Agreements (NDA) from EveryNDA

The importance of signing non-disclosure agreements

First, to address the growing notion that NDAs are irrelevant, I say to you this: ideas are the foundation of all trade, are they not?

Without an idea, you have no industry. Without an industry, you have no business. In fact, for most companies, their net worth is entirely wrapped up in their patents, trademarks, designs, systems, processes, trade secrets and clientele base. Money follows unique ideas and their results.

Second, I address the sad fact that NDAs, when used, are far too often done so incorrectly.

Remember, an NDA is simply an agreement wherein two or more parties agree to keep certain privileged information confidential or secret. This kind of legal agreement can be a mutual or one-way agreement, but always the main goal is to protect information or trade secrets that are critical to a company’s success.

In order for this kind of legal agreement to effectively protect your confidential information, however, it has to be a well-written, legitimate and compelling agreement. In other words, if it won’t stand up in court, then what’s the point?

On that note, let’s go over the 10 key clauses you should have in every non-disclosure agreement.

Without a doubt, the most critical component of a non-disclosure is the definition of the confidential information.

This clause clearly spells out what information is not to be disclosed. This is the whole point of the agreement right here.

Here’s an example of this kind of clause from Sonnyboo Non-Disclosure Agreement where it basically states that all information disclosed by the writer to the producer is confidential:

And as simple as it sounds, far too many agreements have ambiguous definitions which don’t hold up so well in court.

Included in this type of clause should be specifications about what constitutes “privileged” information, as well as an explanation of which formats are covered.

In other words, cover all your bases and specify that information shared through documents, emails, oral conversations, hand-written notes, letters, etc. is all included.

If you’re the Disclosing Party in the agreement, you want to cast a wide net, but not leave any holes.

Besides the obvious need to define the Disclosing and the Recipient parties, a non-disclosure should also contain a clause that specifies who else the Recipient Party may disclose the confidential information to during the course of due diligence and business discussions.

For example, the Recipient Party may have their own accountants and attorneys who may need to review the information.

Or, they may contract a third-party to perform some work, such as a graphic designer, editor, developer, etc. These third-party recipients of your confidential information are critical to the performance of this legal contract and should be included in the non-disclosure.

Every non-disclosure agreement should have a clearly defined timeframe.

There’s no standard time-limit for these agreements, as each situation is unique. Some trade secrets may be just as crucial 10 years from now as they are today, so specify that in the agreement.

Other details, however, may be irrelevant in 18 months and the agreement should reflect that as well.

Under this type of clause, it’s important to keep in mind that most jurisdictions won’t enforce unrealistic time limits on any legal agreement, including non-disclosures.

While you want to protect your business and the information you’re about to disclose, you also have to be practical and fair to the receiving party.

Clause #4: The Permitted Use of the Information

This clause is where you need to clearly define the intended use of the shared, confidential information.

In other words, why are you sharing this information with the Recipient Party in the first place? Be specific. Sometimes this clause is also used to define third parties, but we prefer to keep those separate for clarity’s sake.

For example, a standard non-disclosure agreement often includes this type of clause like this:

Clause #5: The Legal Obligation to Disclose

Even the most careful and reliable of Recipients to confidential information may, at some point, be legally compelled to disclose the information they agreed to keep confidential under this type of agreement.

This may come from a government agency, administrative entity or via the courts.

To protect both parties – the Disclosing and the Recipient – in these kind of instances, your non-disclosure should include a clause acknowledging that a legal obligation to disclose is not a violation of the agreement.

Clause #6: The Return of the Information

At the end of the agreement, the confidential information typically needs to be returned or destroyed by the Recipient Party.

Your non-disclosure should contain a clause stipulating exactly how and when this should occur. This can largely depends on the circumstances of your relationship.

Even the most diligent and thorough of contracts can’t prevent every possible conflict between business parties. Breaches occur and misunderstandings happen.

You want to be prepared for this unfortunate event by including a clause in your non-disclosure that specifies which court has jurisdiction over any resulting legal action.

Believe it or not, arguments about jurisdiction can become just as big as whatever disagreement started the legal action in the first place. Avoid this non-sense by affirming jurisdiction in the agreement.

Along the same lines as the Jurisdiction clause explained above, your agreement should also include a clause that specifies the acceptable remedies in the case of a breach from the Recipient Party’s part.

The costs of a breach can be hard to calculate or prove, so a mutual agreement up front as to what constitutes a fair remedy will help you avoid a lengthy legal battle later on.

This clause should include the possible consequences of a breach and explicitly preserve your right as the Disclosing Party to seek equitable remedies.

Remember that this clause should be a mutually agreeable one so be careful to avoid being too specific, excessive in your remedy requirements or one-sided when it comes to possible resolutions. If it’s too biased, the Recipient Party may be hesitant to sign the agreement as well.

Many in the legal world frown upon clauses that specifically award attorney’s fees or punitive damages to the Disclosing Party, should they prevail in case of a breach of contract.

The argument is that such a clause renders this kind of legal agreement partial to the Disclosing Party and gives them too much incentive to file suit, even for the most trivial of matters.

With that in mind, it’s best to have a mutually agreeable clause that clearly defines who will be responsible for legal fees should a suit be filed. Even if that means clarifying that each party will be responsible for their own fees, regardless of the outcome. The point is to have that discussion up front and make sure everybody is on the same page.

Last, but certainly not least, no non-disclosure should be complete without a non-binding clause.

Because these agreements are often initiated prior to negotiations for a merger, partnership, temporary project, or other similar collaboration, it’s important to include a non-binding clause which allows both parties to terminate the relationship at any point.

In other words, the signing of a non-disclosure agreement generally doesn’t signify a permanent relationship and you should preserve your right to withdraw from the relationship at any point you see fit, provided you abide by any relevant laws or contractual stipulations (the terms in your agreement) when doing so.

Here’s what a standard “No Obligation” clause will look like:

At the end of the day, when non-disclosure agreements are used properly, they protect confidential information, keep trade secrets, and preserve the unique aspects that make your business work.

A well-written NDA will cast a broad net for the Disclosing Party and close any potential loopholes while still retaining a respectable level of fairness and value for the Recipient Party.