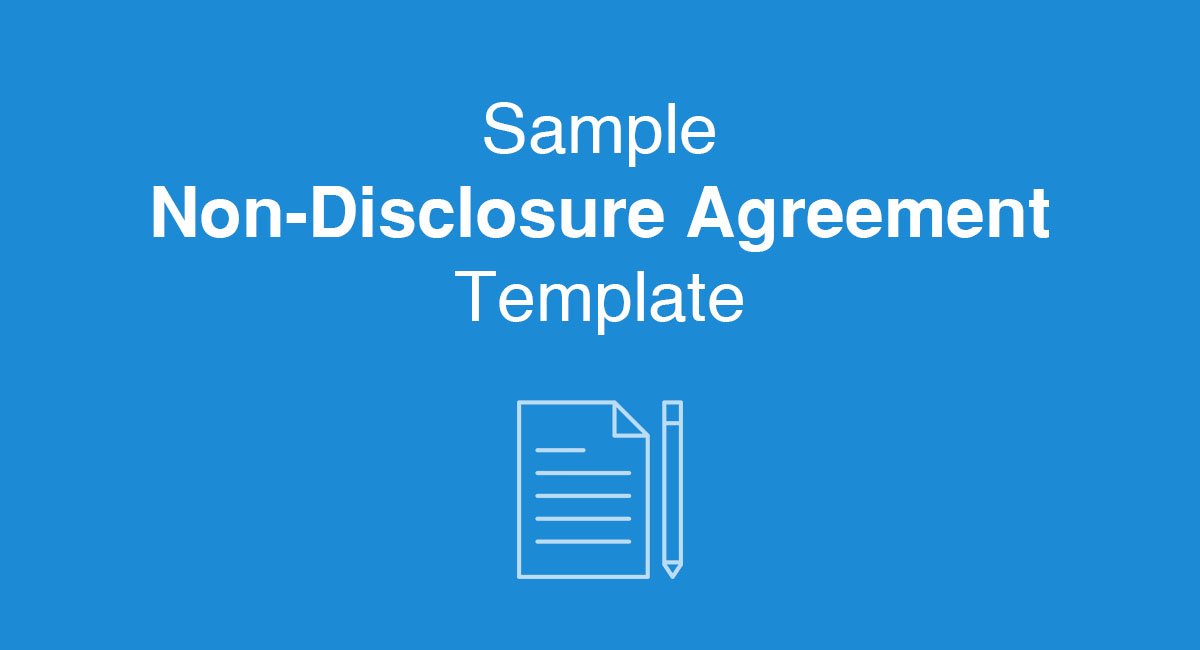 A NDA can also be known by other names such as a confidentiality, non-use or trade secret agreement.

Essentially, a non-disclosure (NDA) agreement is a legally binding contract between parties that requires them to keep certain information confidential.

Why use a NDA?

NDA agreements are commonly used are in employer-employee hiring situations, between parties who are considering entering into a licensing discussion or agreement with each other, distribution negotiations and between startups and companies who wish to gauge the potential possibility of future commercial joint ventures.

An NDA agreement can be for the benefit for both parties involved or solely only for one party.

A mutual NDA is created to protect the confidentiality of both parties disclosures but if only one party is intending to make disclosures, then normally only a one-way NDA will be drawn up.

Here’s an example of a clause that lists the Disclosing and Receiving Parties in a Confidential Disclosure Agreement by the National Institute of Allergy and Infectious Diseases:

Clauses for your NDA

Clause #1: Purpose of the NDA

It’s useful to provide a clause stating the purpose of your NDA agreement as it helps to provide clarity for the direction of the agreement.

Here’s a Statement of Limited Purpose from Microsoft in its “Confidentiality Agreement for Licensing Discussions” to clarify what disclosures the agreement is meant to apply to:

Courts also frequently consider whether the definition of what’s considered confidential in the NDA agreement is reasonable and not too broad.

The Disclosing Party is given the freedom to specify what information will be considered confidential but it should also be able to justify why the information needs to be protected by confidentiality.

It’s also important to examine the scope of your NDA agreement and ensure that it is reasonable.

Some countries and states are particularly against agreements that come across as unreasonably restrictive, onerous or anti-competition.

For example, clauses that prevent a Receiving Party from using his or her industry knowledge and experience and therefore, not being able to earn an income in the same industry in the future might be considered unreasonably restrictive.

For example. in Lasership, Inc. v. Watson, the Virginia court held that the NDA agreement was unenforceable because the requirement of confidentiality applied too broadly and the terms of the agreement were to also apply indefinitely.

Clause #4: Duration of the NDA

Even if the scope of the NDA agreement was reasonable, the agreement may still be struck down if the duration for which confidentiality is meant to apply for is too long.

A perpetual agreement continues to endure as long as the information is considered confidential whilst a NDA agreement with a limited time duration expires once the time duration is reached.

This is because not all types of confidential information continue to retain value after an extended period of time.

For example, customer lists may no longer be accurate, marketing strategies may become outdated and pricing models may cease to be effective after a certain period of time.

In contrast, courts have ruled that trade secrets have inherent value based on it being kept a secret and therefore, should be protected indefinitely.

In order for a certain type of information to quality as a trade secret, it has to possess commercial value, confer some sort of economic benefit to its owner and reasonable effort must have been made to keep it a secret.

California is generally known as a state that’s against anti-competition clauses, but even Californian courts respect the importance of trade secrets.

In Pacesetter Inc. v. Nervicon Co. Ltd, St. Jude Medical alleged that its trade secrets were stolen by an employee engineer and was awarded the amount of $2.3 billion which was later trimmed to $947 million.

You can use NDA agreements to protect trade secrets but make sure that the duration requirement for confidentiality for such information never expires.

In other words, make the NDA agreement to apply perpetually.

If you make the mistake of including a time limitation in your NDA for a trade secret, this would mean that the Receiving Party is no longer obliged to keep your trade secret confidential after the time duration for secrecy has expired.

An example is the case of Silicon Image, Inc. v. Analogk Semiconductor, Inc. where Silicon Image made the mistake of providing a time limitation in its NDA agreement which applied to trade secrets.

However, if you’re going to be covered by a jurisdiction where perpetual NDA agreement are generally not accepted, then you may be better off having two distinct clauses to cover the two separate disclosure time periods.

Here are some example of clauses from Coca Cola’s Agreement on Confidentiality, Non-Competition and Non Solicitation where Coca-Cola limited the disclosure period for ordinary confidential information to 2 years after termination of employment but required indefinite confidentiality for its trade secrets: 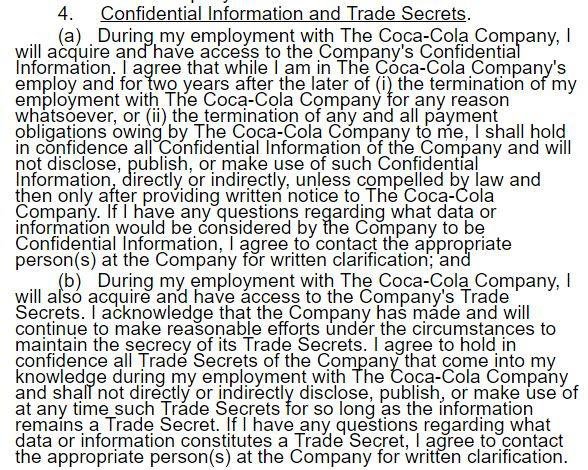 To clarify what information would be considered ordinary confidential information and what would be trade secrets, you should define these two types of information in your NDA agreement. 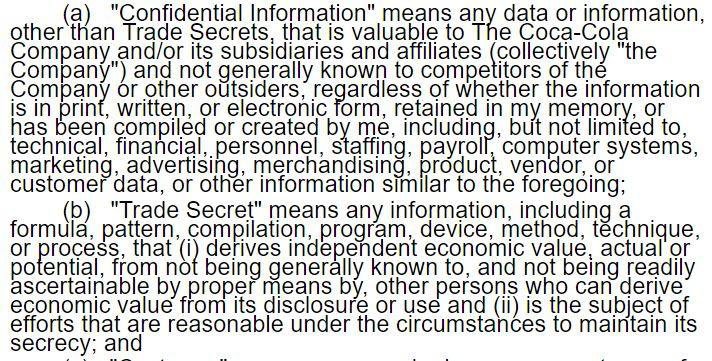 In addition to the definitions, you should ensure that you mark your disclosures appropriately as “CONFIDENTIAL” or “TRADE SECRET” to prevent confusion.

Clause #5: Exceptions to requirement for confidentiality

There are some commonly accepted exceptions for the requirement of confidentiality.

To ensure that your NDA agreement avoids the risk of being invalidated, you should make sure that you include these exceptions into your NDA:

In the event that you have to enforce the NDA agreement against a breach by a Receiving Party, the jurisdiction that applies to your agreement will be vital.

If there’s no clear jurisdiction provided for in the agreement, then you may be looking at extra legal costs in order to determine this issue.

To avoid this expensive exercise and to prevent the possibility of a non-supportive outcome, you should state clearly which jurisdiction you want to apply to your NDA agreement:

An example of a clause that provides for jurisdiction can be found in a template NDA from Harvard Business School:

Clause #7: Termination of the NDA

To avoid any confusion, you should also specify what you wish the Receiving Party to do with the copies of confidential information that are in their possession when your NDA agreement ends.

For example, you could require that the other party returns all originals and copies of the information back to you or destroy them within a certain period of time and retain no other records or copies.

Normally, a NDA agreement provide for both monetary compensation as well as injunctive and equitable relief to stop any further breaches from occurring.

Often times, it’s hard to prove the true cost of a breach of confidentiality and this is even harder if no actual sales have begun. Aggrieved parties often find it useful to do damage control and prevent further disclosures by the Receiving Party. 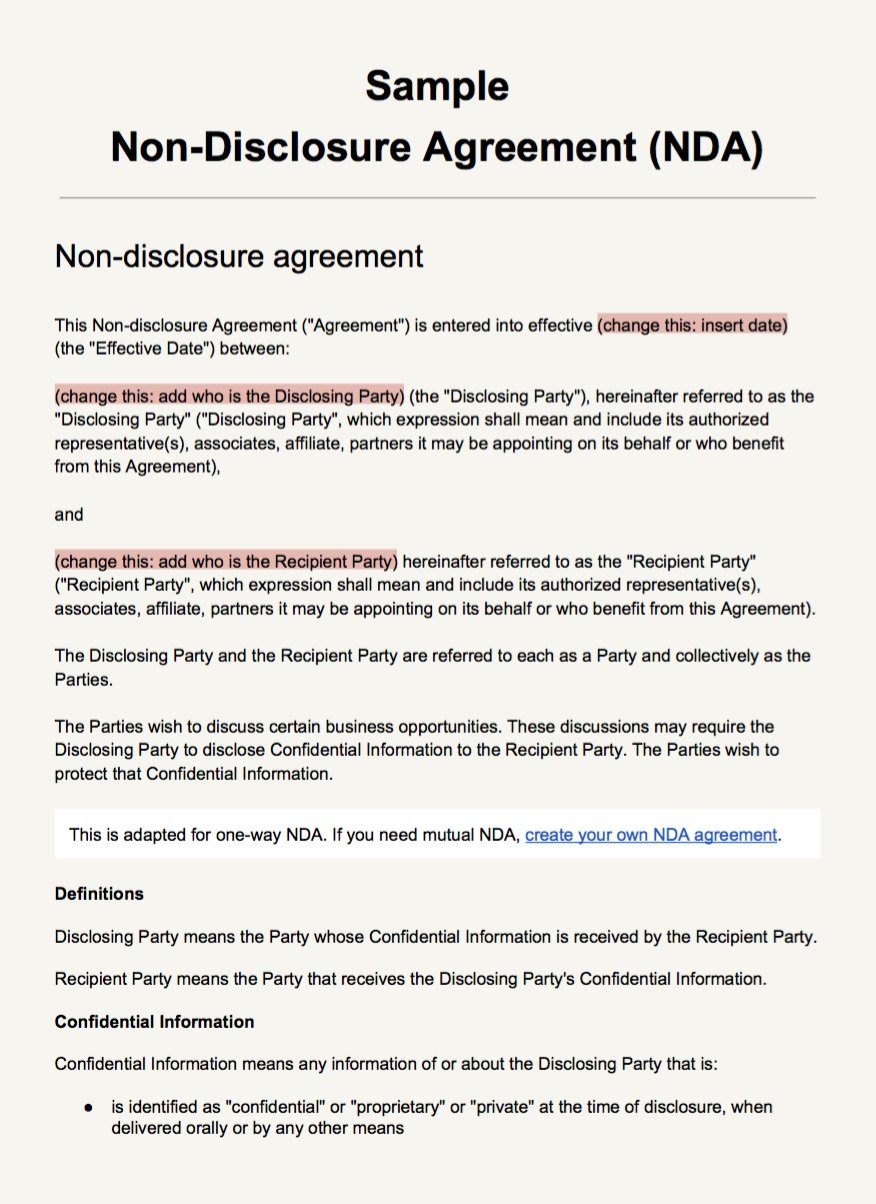 Use Non-disclosures for Works in Progress (WIP)