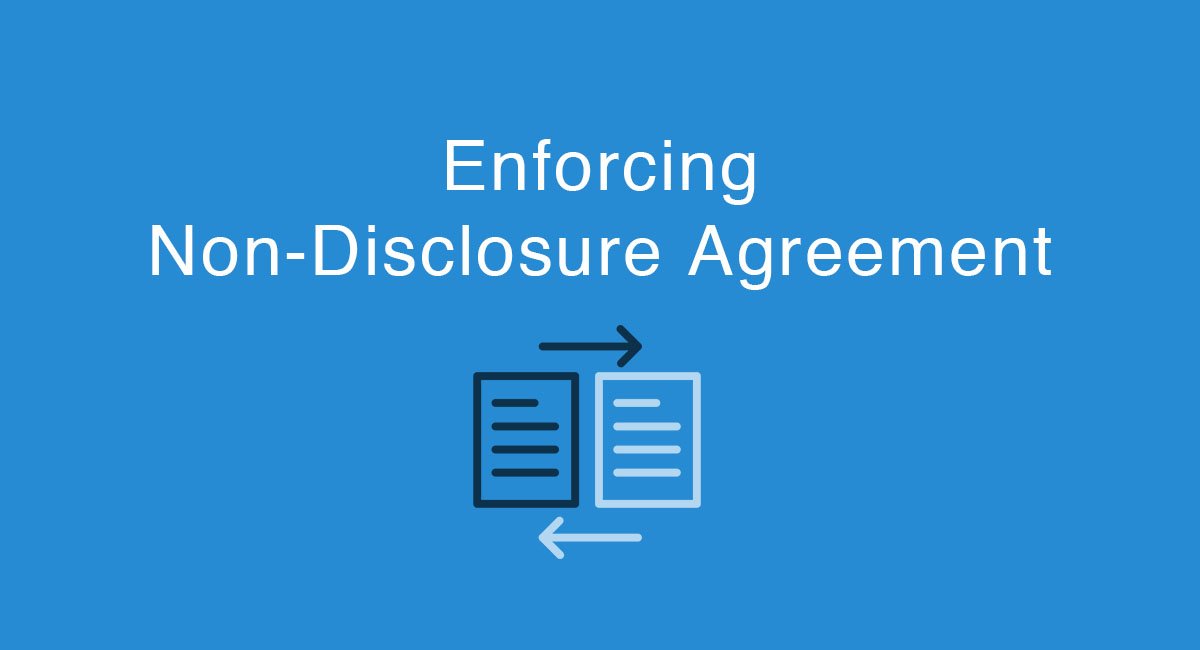 When your transactions with other people or companies involve sharing confidential information, you’ll likely use a non-disclosure agreement as reassurance to keep that information secure.

In most of these cases, the entire exchange will go without a hitch and everyone involved will enjoy the benefits of the project.

However, if your confidential information is intentionally or accidentally disclosed to unauthorized parties or even released publicly, it can be a devastating development. Such an occurrence compromises your competitive edge.

Fortunately, you can prevent most of these incidents with clear expectations, effective procedures, and a plan in case anything suddenly shows up in the public domain.

Do I need an NDA?

Anything your company offers that’s unique to the market is a trade secret: It’s simply information that is valuable and confidential.

Examples of trade secrets include the complex algorithms of your company’s most profitable app or something as mundane as your client lists.

That’s the primary reason for using NDAs: it’s the best way to assure that if your company’s trade secrets leak, you can secure relief and recover from the damage of the disclosure.

In these instances, you are entitled to two types of relief: monetary or injunctive – and frequently both.

Monetary relief includes cash payments paid by the offending party that’s intended to compensate you for what your company lost when the trade secret was disclosed.

Injunctive relief is an order from the court to stop the other party from continuing the disclosure. Most cases involving a breach of a non-disclosure agreement combine both types as one on its own is usually inadequate.

For example, let us suppose you hire developers to make that award-winning app even better.

You involve three in this project and each signs an NDA with you. Two of these developers remain loyal contractors, however one decides to sell the secrets of your app to another company.

Since you issued the legal agreement, you can sue that developer for breaking the promise.

In the lawsuit, your monetary relief likely includes lost profits due to the other company benefiting from your secrets. Injunctive relief will request not only that the developer stop disclosing your information further but also preventing the competitor company from using your trade secret in future products or releasing the current one that arose from knowing your secret.

That’s why not only is the breaching party to your agreement named in these lawsuits but so are any third parties who benefit from the breech.

At this point, you may see this as nothing more than a series of threats to keep people in line.

However, there’s a positive angle to this scenario. These kind of NDAs can facilitate open communication. It allows you to work with another party without the fear of your developments becoming known before they are ready. Knowing you have this enforceable agreement, you’re more likely to share the information necessary for the developer to improve your plans, creating a better exchange of information.

Even with these strategic advantages, you’ll still encounter arguments against using and signing these kind of agreements.

One exists primarily on a human level: asking a contractor, developer or employee to sign one immediately can create an environment of mistrust.

You can avoid that by being upfront about expectations in the beginning and only requiring a signature when the exchange of confidential information starts.

Many companies, like IBM, will not introduce an NDA unless the exchange of confidential information proves absolutely necessary.

If your industry starts partnerships with informal discussion, the IBM approach is likely more appropriate for you.

A second issue is the question of whether any relief is adequate when your company faces a breach of its trade secrets. In many ways, the damage is done once the protected becomes public and there’s no way of making it confidential again.

Some contract provisions, like the one in the Accuride example below, acknowledge this and leave it the court to determine damages and injunctive relief.

Your company might also ponder whether this is a worthwhile effort but the overwhelming opinion appears to be that some chance of relief is better than none.

NDAs offer peace of mind and if they are breached, there’s no doubt that the consequences could prove immense.

Apps that leak to the market too early, personal information of clients that gets loose, and any other mishandling of information could not only compromise company advantages but also diminish goodwill with customers.

Having a way to secure relief if this occurs is no doubt reassuring.

However, if you need to prove a party breached an NDA, it will be a difficult process.

Even if you see that your confidential information is publicly available, you still need to link that occurrence to a particular person before you hold them liable.

To establish that, you must have specific information available that addresses:

The good news is, the same monitoring procedures that could help you prove the source and nature of a breach over an NDA may also help prevent these incidents.

This is not limited to people feeling they cannot get caught. It also creates an atmosphere of understanding between you and the other party to the legal agreement where everyone is aware of what must remain protected.

How to avoid breaches

There are likely rare instances where breach of an NDA is unavoidable.

You could possibly sign an agreement and partner with an inherently dishonest person who only wanted to steal your trade secrets. When you come across this clearly actionable situation, it is unlikely that there was much you could do to prevent it.

However, most breaches arise not from dishonesty but from misunderstanding. If you and the other party are not certain of what constitutes “confidential information” you’re at risk of a breach. Failing to control the access and return of information is another shortcoming where you could easily fall victim.

In order to avoid these situations, here are some strategies to help you manage the exchange of information without destroying confidentiality.

Go beyond the general definition and include a provision that describes the exact nature of the confidential information.

For example, let us assume you’re discussing a new app with a developer that uses a proprietary algorithm owned by your company.

This element is unique from apps of its type and having it become public information would be detrimental to your bottom line. If you know your transaction will deal with this algorithm specifically, mention it directly in your agreement.

It does not have to be detailed – that would defeat the purpose of the non-disclosure agreement. Designate it as “proprietary algorithm” in the agreement and leave no doubt that it’s to remain confidential.

If there’s a lot of information being exchanged or shared, consider describing these pieces in an addendum attached to your agreement.

Many types of contracts, including non-disclosure agreements, contain exhibits for the purpose of clarification.

That way, instead of giving a long detailed description in your agreement, you can simply refer to “Exhibit A“. This is a good uncluttered way to describe complex concepts that require protection in your transaction.

Having clear terms and descriptions in your NDA is helpful, but they could still be subject to interpretation.

For example, a description of confidential information like the one in the Sonnyboo Non-Disclosure Agreement can be broad for your needs. It basically states that all information disclosed by the writer to the producer is confidential.

In these kind of examples, “disclosure” and “confidential” could become misunderstood.

Is an accidental discovery of a writer’s script, for example, constitute a disclosure? Does it fall under the requirement of confidentiality? People could see these issues differently and that risks a breach of the non-disclosure agreement.

One way you can prevent these misunderstandings is to clearly mark items as “confidential.”

If you run a media company, this could include any plot concept flowcharts, scripts or other writer drafts.

For the IT workers,, if you have computer program or algorithm descriptions in writing, mark those confidential too.

You may find it impossible to mark all items so consider taking this step with your most critical intellectual property. That way, you know all parties are on the same page over what counts as confidential information.

When you feel the excitement of new innovative developments, it’s easy to exchange information without enforcing controls. This runs the risk of disclosing information inappropriately or revealing items that are not discussed in the agreement.

In this sharing free-for-all, it’s very difficult for you, the owner of the proprietary information, to prove there is a breach and receive relief.

To prevent this from happening, keep a record of the specific documents, databases, algorithms or other items you make available to the other party. If it’s a database, set a username and password that only allows access to the permissible information.

For documents, maintain a list of the disclosed items. You can also consider a check-out system where the other party signs into a spreadsheet or other online tracking system when they receive the information.

The purpose of all this is to maintain some control and means of tracking so you can assure that only permissible items are released.

Once you complete the project, you’ll need a system to facilitate return of the information.

If you had a check-in process, it acts as a handy checklist that assures all information is accounted for and returned. Database information and electronic documents cannot be “returned” per se but you can eliminate the other party’s access to them.

Once finished, arrange to cancel any log-in information used by the other party.

Enforcing an NDA comprises both preventive and reactive measures.

They are basically the same strategies as many of the steps taken to assure confidentiality can also become handy if you need to prove a breach of confidentiality.

Consider spending time auditing your procedures as to confidential information and reviewing agreements for clarity.

You’ll likely prevent many information breaches by just being careful but as an added bonus, you’ll also enjoy having strategies in place in case you find your company’s most valuable secrets are suddenly available to the world.