How to Terminate an NDA 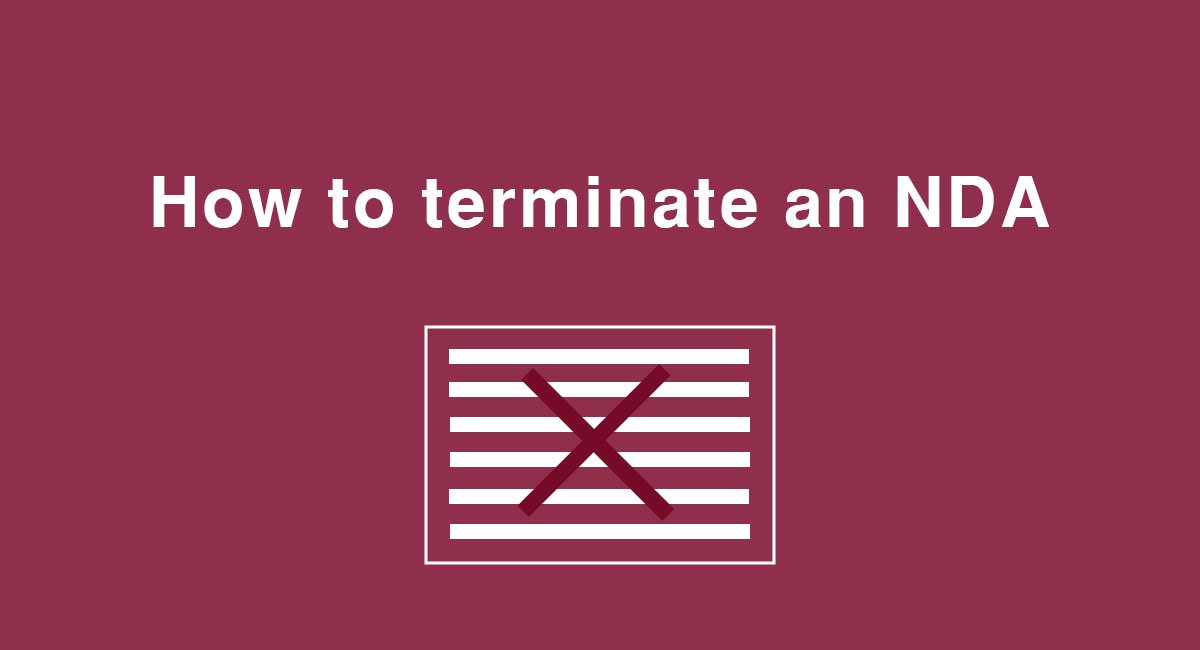 Have you ever signed a contract before and then regretted it later? Contracts regulate and help to provide some legal structure to our lives. From marriage contracts to agreements for sale and purchase to billion-dollar takeovers, contracts are a fundamental legal tool in our society.

In the US for example, a legally binding contract must consist of an offer from one party, acceptance of that offer from another party, consideration from the party accepting the offer, and the mutual acceptance of both parties to be bound by the contract. In addition, both parties must be legally competent and capable of entering into the contract.

For example, the person must be mentally sound and above the age of 18 in most states before they can enter into a contract.

In addition, for certain transactions such as the purchase of real estate, the agreement must be in writing using an approved legal instrument before it can be considered legally binding.

A non-disclosure agreement (NDA) is a contract between parties wherein either one or both parties agree to keep specific information from the other party a secret.

This includes not exposing the information to unauthorized third parties and also promising not to use it without the disclosing party’s permission.

An NDA is usually created for the benefit of the party that is making the confidential disclosures (“Disclosing Party”).

The party that is receiving the confidential information (“Receiving Party”) agrees to be limited and bound by obligations of confidentiality in exchange for any potential benefit that he or she might receive from the Disclosing Party.

This could include a profitable licensing partnership, a job offer, or the potential possibility of purchasing the Disclosing Party’s business.

How to Terminate an NDA from EveryNDA

There are two types of NDAs:

One-way agreements only seek to protect the confidentiality of one party’s information and this is normally used when only one party intends to make disclosures.

How to terminate the NDA

Good NDAs will have two different terms of duration. Firstly, a term for the NDA itself, which is the effective period for the agreement wherein both parties will remain in a contractual relationship.

For example, the parties may decide that they want to enter into negotiations for a year to discuss a licensing partnership.

A good agreement will also provide for a second term which covers how long confidentiality obligations are expected to apply for.

This is normally a separate term from the term of the NDA itself because confidentiality obligations normally continue after the NDA has expired or been terminated.

In other words, confidentiality obligations do not automatically cease when the agreement expires.

How long does it go on for? It depends on the terms negotiated by the parties and what is finally agreed upon.

Otherwise, if confidentiality obligations automatically end when the NDA expires or is terminated, then the Receiving Party can wreck mayhem on the Disclosing Party by exposing or misusing the confidential information that they have just gained.

Here’s a clause from Accuride Corp’s Confidentiality and Non-Disclosure Agreement that shows that the five year confidentiality period starts from the date of the agreement itself:

In this clause, the confidentiality obligation clock only starts ticking from the date of the disclosure itself.

There’s also a type of NDA that does not have a specified end term for confidentiality. These kinds of NDAs normally cover confidential information with special status such as trade secrets.

If a term for confidentiality is not specified in the agreement, in the event of a conflict, it’s up to the parties to argue the case for whether the NDA is meant to have a perpetual term or not.

A perpetual NDA means that the receiving party of confidential information has an obligation to keep the information received secret forever.

Such a hefty obligation of confidentiality obviously benefits the party making the disclosure but unless a trade secret is involved, it may backfire as a court may find that the obligation is too onerous and declare it invalid.

Like any other relationship, business partnerships can come to an early end unexpectedly. In the same way, a party that has signed an NDA may decide that she/he wants to terminate the agreement before the agreed end date of the agreement.

This could happen for many reasons: 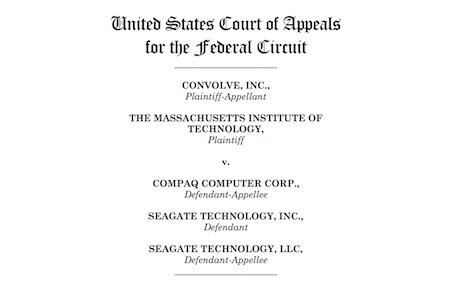 The parties had started meeting together to discuss the possibility of a licensing agreement but after three meetings, the parties could not come to an agreement and the NDA was terminated.

Later on, the defendants incorporated some of the technology of the plaintiffs into their own business products but alleged that the technology was not confidential information as defined under the NDA and therefore was open for use.

The plaintiffs lost the case because they were held to have failed to keep to their end of the bargain in the NDA by marking the contentious technology as confidential information.

The case illustrates how potential partnerships and agreements can come to an abrupt and unexpected end and how you should be prepared for the downsides as well as the upsides. A good NDA should have a clause that provides for how the agreement can be terminated.

The termination clause should specify:

If the NDA is a one-way or unilateral agreement and the terminating party is the party that made the disclosures, then generally terminating the NDA is not a huge problem because the contract was made for the benefit of that party anyway.

However, it’s important to note that the Receiving Party is most likely still going to be bound to any obligation of confidentiality for information that has already been received, depending of course on the confidentiality term stated in the NDA.

Similarly, if the party that wants to terminate is the party that has received confidential information in a unilateral agreement, then if drafted correctly, the Receiving Party will still be bound by the obligation of confidentiality for the term specified in the NDA.

Here’s an example of a clause taken from a one-way NDA from Upcounsel providing for 30 days written notice for termination of the NDA. However, the obligation of confidentiality is meant to continue after termination:

Here’s another example of a clause taken from a mutual NDA where 30 days written notice is required and the obligation of confidentiality is to continue for five years after the termination of the agreement:

In this next example of a clause from an Independent Contractor Agreement from JUX Law Firm, the clause specifies several ways that the NDA can be terminated including a notice in writing that is served personally or sent by registered or certified mail return.

Alternatively, if there are grounds for reasonable cause for termination including a material violation of the NDA or if there was an act exposing the other party to liability for personal injury, property damage or any other liability cognizable by a judicial body of competent jurisdiction, termination is effective immediately upon the giving of written notice to the other. 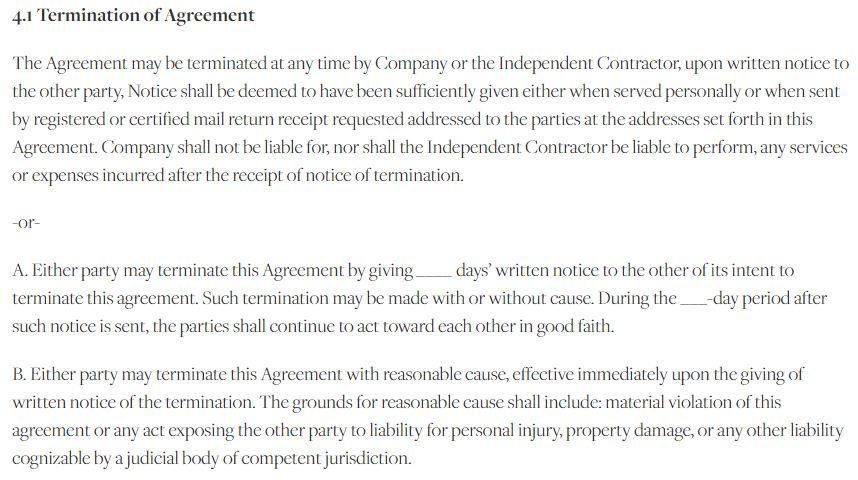 3. Read the “Return of Information” clause

Another important clause to consider is a clause providing for the return of confidential information upon termination of the NDA.

In this clause, you can specify that the other party is required to return all information back to you, to destroy all copies of information in their possession, to show you confirmation that they have done so and perhaps also, to agree not to make any further copies from then onwards.

Here is an example of a clause taken from ABWCCI:

Here’s another example from the University of Glasgow’s One-Way NDA:

In summary, there’s no reason why an NDA cannot be terminated if things are no longer working out between the parties.

However, this doesn’t mean that confidentiality obligations are automatically cancelled upon termination.

More likely than not, these obligations are expected to continue for a period of time after termination of the NDA.

To lessen confusion and to protect the confidentiality of any information even after termination of the contract, the NDA should be drafted clearly to provide for these events.

Use Non-disclosures for Works in Progress (WIP)