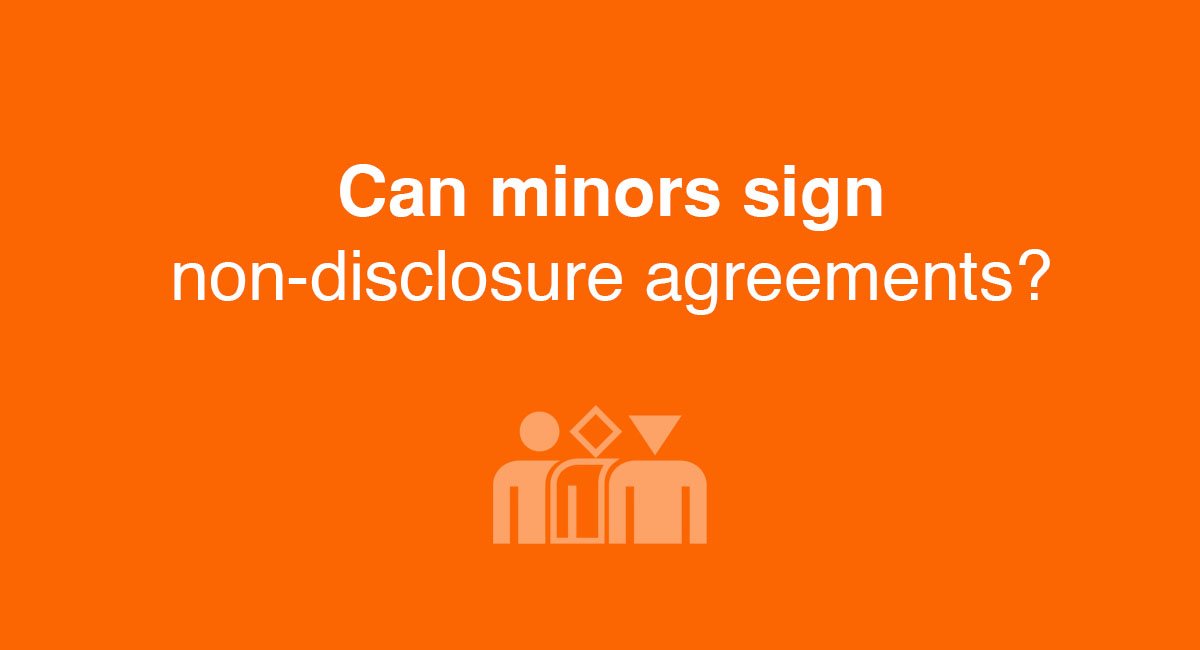 Can minors sign non-disclosure agreements? The short answer to this question is, “yes.”

But signers should beware. Legally speaking, minors can sign contracts; including non-disclosure agreements. Anybody who knows their name can sign on the dotted line so long as the other party agrees to the terms.

The real question is, “Will the non-disclosure agreement be enforceable?” And, that, my friends, is an entirely different story.

Minors, contracts and the law

A non-disclosure agreement, or NDA for short, is an agreement between two or more parties agreeing to maintain the confidentiality of certain information exchanged during the course of business.

These non-disclosure agreements can be mutual, where both parties are disclosing privileged information, or one-way wherein one party discloses and the other party simply receives the confidential information.

By law, a contract is required to meet a number of criteria in order to be binding and enforceable. The criteria in question here is the capacity of the parties.

Capacity refers to the contracting party’s ability to read, know and understand the terms they’re entering and agreeing to.

That’s why state and federal laws generally won’t enforce a contract signed by a minor under the age of 18. The minor is considered to not be of sufficient legal capacity to understand what they’re signing.

That said, it’s still not illegal to enter into a non-disclosure agreement or other contract with a minor.

The non-disclosure will simply be voidable – meaning that the agreement will be valid unless, or until, the minor decides to void the agreement.

If the minor decides they know longer want to abide by the non-disclosure agreement, enforce its terms, or meet any obligations under it, then they are fully within their right to cancel the contract, no matter how many of the terms have already been met, and there’s nothing the other party can do about it. (Generally speaking.)

So, the basic thing to understand is that you’re well within the law to enter into a non-disclosure with a minor. But beware that the minor can pull out of the agreement at any time, and you’ll likely have no legal remedy to enforce it in a court of law.

These days, it’s not uncommon for minors to sign contracts.

Child actors and musicians sign them all the time. Minors who find themselves without legal guardians can be granted legal status to sign. Some minors even find themselves the guardian of an older parent or grandparent, giving them the ability to manage financial affairs, rental agreements and health insurance policies.

Non-disclosure agreements are no exception.

For this reason, and others, minors are entering into these kind of legal agreements and other contracts, just as any other business man or woman would in the same situation.

In New York, for example, minors can enter into contracts to perform as musicians, actors, artists, vocalists, etc.

California is another example wherein minors can be given specific rights to work as a performer, particularly in Hollywood, and non-disclosures are not uncommon as actors and performers are often bound to secrecy about a production until a specific date or time.

Other entrepreneurial minors, such as those starting companies or creating marketable products, are entering into any number of business agreements, including these legal agreements, and often as the Disclosing Party.

Options for minors as the Disclosing Party

When a minor finds himself in a position requiring the execution of a non-disclosure agreement, either as the Disclosing Party or the Receiving Party, they have a number of options for ensuring that the contract is valid and enforceable.

Some contracts, such as those related to necessities like food, shelter or clothing, are enforceable even if one party is a minor.

However, as most non-disclosure agreements won’t relate to anything considered a necessity, it won’t be so easy to ensure the contract is valid.

Remember, minors are allowed to sign contracts. The actual signing is not the issue. The problem is in ensuring that the contract is valid and properly enforced.

One option for a minor signing a non-disclosure and wishing to ensure that it’s valid is to sign close to their 18th birthday. Once they turn 18, the contract will essentially be ratified and no longer voidable.

The minor, now a legal adult, will be bound to the terms of the agreement without the get-out-of-contract free card afforded to them when they first signed as a minor.

Another option is to have a parent co-sign.

Many times, this means very little as the parents are not actually a party to the contract and therefore have to capacity to sign.

However, if the agreement and its terms are in the best interests of the minor, such as protecting the confidentiality of a patent for a gadget they’ve invented, then a parent or legal guardian may co-sign and some jurisdictions will find the contract to be binding.

The key here is that the non-disclosure agreement truly must be in the best interests of the minor, with no other way to protect their interests.

There are other options, as well, that are a bit more legally complex.

In some states, such as Texas and Nevada, a minor can file a petition with the courts asking for a removal of their disability. Minors who are 16 or older, largely responsible for themselves and independent financially can request that their age be removed as a barrier to entering legally binding contracts, including non-disclosures.

Certain criteria must be met, of course, but it’s an option for older minors, with compelling independence, seeking the ability to enter into the terms of this kind of legal agreement.

Below is an example of Texas law regarding this issue:

A similar option is emancipation. An emancipated minor is essentially given the same rights as a legal adult.

The courts basically confirm that the parents or legal guardians no longer have legal custody of the minor and the minor is free to make his or her own decisions without the interference of an actual legal adult.

Emancipated minors can obtain work permits, be sued in court, sign non-disclosures and other contracts, make healthcare decisions, get married, and so on, varying slightly, depending the jurisdiction.

But almost always the ability to sign and enter into agreements is granted.

Emancipation is a drastic action, though, and probably should not be sought simply for the purposes of being able to sign the NDA.

Consequences to the Disclosing Party

As the Disclosing Party, entering into a non-disclosure agreement with a minor can be risky.

Unless that minor meets one of the above circumstances, such as being emancipated or having a removal of minority disability, you’re probably taking a big chance by signing the agreement with them.

That’s not to say that it’s always a terrible idea, but you should definitely be sure you know what you’re getting into.

As was noted earlier, if the minor decides that they no longer want to abide by the terms of the non-disclosure agreement, they can likely void the contract without question and there will be very little you can do to enforce it.

And, yes, that means that if the minor decides to bolt, they can take your confidential, privileged, private information and disclose it publically.

At best, you may be able to sue the parents or legal guardian for damages, but even that is doubtful. And even if you did succeed, it would likely do very little for you; the cat would already be out of the bag. Literally.

The moral of the story here is that, yes, minors can sign NDAs. However, short of a few instances wherein a minor has full legal capacity to cement the enforcement, the contract is voidable by the minor, leaving you vulnerable and with very few remedies if the minor breaches or otherwise voids the contract.