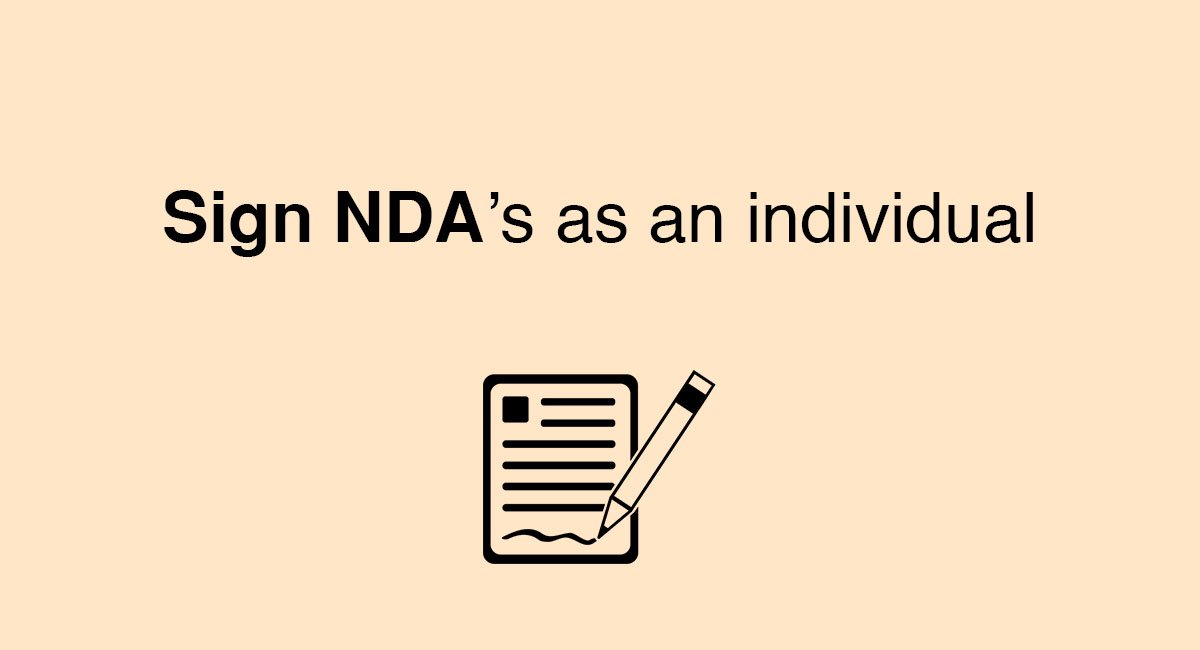 Let’s say that in your spare time, you have developed a mobile gaming app and have found a potential mobile gaming company ABC Limited to partner with.

ABC Limited is established in the market that you wish to enter and is also well-resourced. It will be a win-win business partnership for you if you could license your app to them.

Before agreeing to meet with you, ABC Limited requests that you sign a non-disclosure agreement (also known as an NDA) with them which they sent to you electronically.

You read through the terms of the agreement and it seems to imply that they are expecting you to sign as a company even though you are not set up as a company.

What do you do?

Firstly, what’s an NDA anyway? Basically, it’s a contract between parties that legally requires information that’s confidential to be kept secret by the parties for a defined period of time.

NDAs are especially common with businesses, entrepreneurs and companies for initiating negotiations, licensing discussions and other potential business relationships.

It’s used to provide legal protection so that highly sensitive information such as trade secrets, technological innovations and customer lists can be disclosed with agreement that the other receiving party (sometimes known as the Recipient Party under the terms of this agreement) will not share the information with others without authorization from the other party (usually the Disclosing Party).

Without NDAs, honest and deep business discussions with potential business partners would be almost too risky.

What’s deemed confidential can vary from agreement to agreement. It’s normally up to the parties to decide what would be confidential and what’s not.

Let’s start by examining what legal entity you should be doing business in.

Depending on which country you are in, the exact name, type and specific rules of a legal entity will vary but generally, the common forms of entities that you will encounter are the sole proprietorship, partnership and company.

A sole proprietorship, also known as a sole trader is run by one person where the owner and the business are the same person.

This entity is normally more popular among beginning single entrepreneur, freelancers and other types of self-employed people. As a sole proprietor, your business income is taxed as your personal income.

You reap all profits but also bear all liabilities of the business. The benefit of such a legal entity is that it’s easy to manage and requires almost no set up but there is a major downside: your personal assets are exposed to any lawsuits against the business.

This means that your personal assets in your own name are at risk for any mistakes that you make in your business, including personal bank savings and your own home.

If you decide to sign an NDA as a sole proprietor, your personal assets would be at stake if ABC Limited were to sue you for any breaches in the agreement.

Because of the potential huge risks, it’s preferable that you don’t sign any kind of legal agreement (including NDAs) in your own name but set up another legal entity to provide you with more legal protection.

If you share the business with other business partner(s) and you have an agreement between yourselves, you may be in a partnership.

A partnership is similar to the sole proprietorship but instead of operating on your own, you are in business with another person(s). In a partnership, all owners of the business share in the profits, but are also personally liable for any liabilities against the business.

This also means that if one partner were to make a mistake in the business and be sued, other partners are also immediately liable. In other words, you’re liable for each other’s business mistakes.

This is also not a good entity to be in when you are undertaking riskier ventures, unless there is a high level of trust between the partners and there is very little possibility of any potential lawsuits.

By signing an NDA when you’re in a partnership, you would be binding all other partners to the same legal consequences.

Depending on your country, there can be several different types of companies with slightly different titles, rules and structures including the limited liability company, S-corporation and C-corporation.

However, there are some similar characteristics between all these different types of companies.

Unlike a sole proprietorship and partnership, a company is treated as an entirely separate and independent legal person in its own right.

The company is responsible for its own taxes, liabilities and profits. This means that the company’s business liabilities do not extend to the personal assets of the owners.

The owners are normally the shareholders of the company and the company is normally managed and run by appointed directors and officers.

However, it’s possible as well for a company to consist only of a single person where you hold 100% of the shares and directorship power.

Since you’re planning to sign an NDA that has potential legal consequences, it seems wise that you should register your business as a company and sign the agreement on behalf of the company, instead of signing it in your own personal name.

As a sole proprietor or individual

If both parties under the NDA were signing as sole proprietors, you have to ensure that both your full names are stated clearly.

If you wanted to ensure that there would be no doubt about who the parties were, then you could add identification information such as addresses or social security numbers.

If you were both based in the US, here’s an example from Coca Cola’s Agreement on Confidentiality, Non-Competition and Non Solicitation: 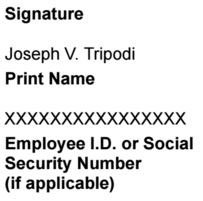 As mentioned earlier, if you were to sign the NDA as an individual (ie. operating as a sole proprietor), you’ll be personally liable for any potential lawsuits that arise from the agreement being breached.

If you were to sign as a partner of your business, you’ll be binding all the other partners in your business to the NDA terms and rules and its potential legal consequences.

The signatures should reflect that the partner is signing on behalf of the partnership.

Note that partners with inability to bind the partnership such as sleeping partners or limited partners should not be signing the agreement.

Let’s say that you have decided to set your business up as a company and you are its CEO.

You are now ready to sign the NDA on behalf of the company but you still need to be careful how you do this.

To make it expressly clear that you are not signing in a personal capacity, you should always ensure that your company, not you, is clearly stated as one of the parties in the NDA.

Below is an example from Thoughtbot’s Mutual Non-Disclosure Agreement:

You should also ensure that when you sign at the end of the agreement, you should state that you are signing as [position or title] of [your company name].

An example is provided below from Accuride Corp’s Confidentiality and Non-Disclosure Agreement:

In addition, you should include a clause that clearly states that the parties acknowledge that they have authority to bind the entities that they represent in the agreement.
Below is an example from Canadian Corporate Counsel Association’s Mutual Confidentiality and Non Disclosure Agreement template:

If you have any doubt about whether the other person purporting to sign the contract has the ability to bind ABC Limited, you can request written confirmation by email or fax from ABC Limited to confirm that the person signing the agreement is who he or she says they are and is legally authorized to enter into this kind of agreement with you.

Alternatively, you may request for a copy of the “Certificate of Incumbency“, also known as a “Registrar of Directors” or an equivalent document from ABC Limited.

This certificate is used to confirm the identities of officers within a company that can sign on behalf of the company.

Now, let’s attend to the question of whether the NDA agreement would still be valid if either you or ABC Limited signed the agreement electronically.

The United Nations has attempted to provide some unifying features through the UNCITRAL Model Law on Electronic Signatures 2001 but this model law has only been adopted in 32 states including the UK, China, Mexico and India.

In the UK, the Electronic Communications Act 2000 states that an electronic signature on a contract is legal where the signature is part of or associated with the contract itself and the signing party confirms the authenticity of the contract.

In the US, the Electronic Signatures in Global and National Commerce Act (ESIGN, 2000) and the Uniform Electronic Transactions Act (UETA, 1999) recognize valid online signatures as equivalent to paper signatures.

For an electronic signature to be valid, the signatory must have intended to sign or consented to the contract and received UETA consumer consent disclosures. There also needs to be a record of how the signature was created and this record should be attached to the contract.

In Canada, electronic signatures are governed by the Personal Information Protection and Electronic Documents Act (PIPEDA, 2000). To be valid, an electronic signature must be unique to the person signing and linked to the contract in a way that any changes can be seen. The person signing also needs to have sole control over the signing process and his or her identity must be verifiable.

So depending on which jurisdiction applies to the NDA you’ll create and sign (as an individual or on the behalf of a company), you should ensure that the platform that you use to sign the agreement fulfill the local legal requirements.

Credits: Icon enroll by mikael bonnevie from the Noun Project.