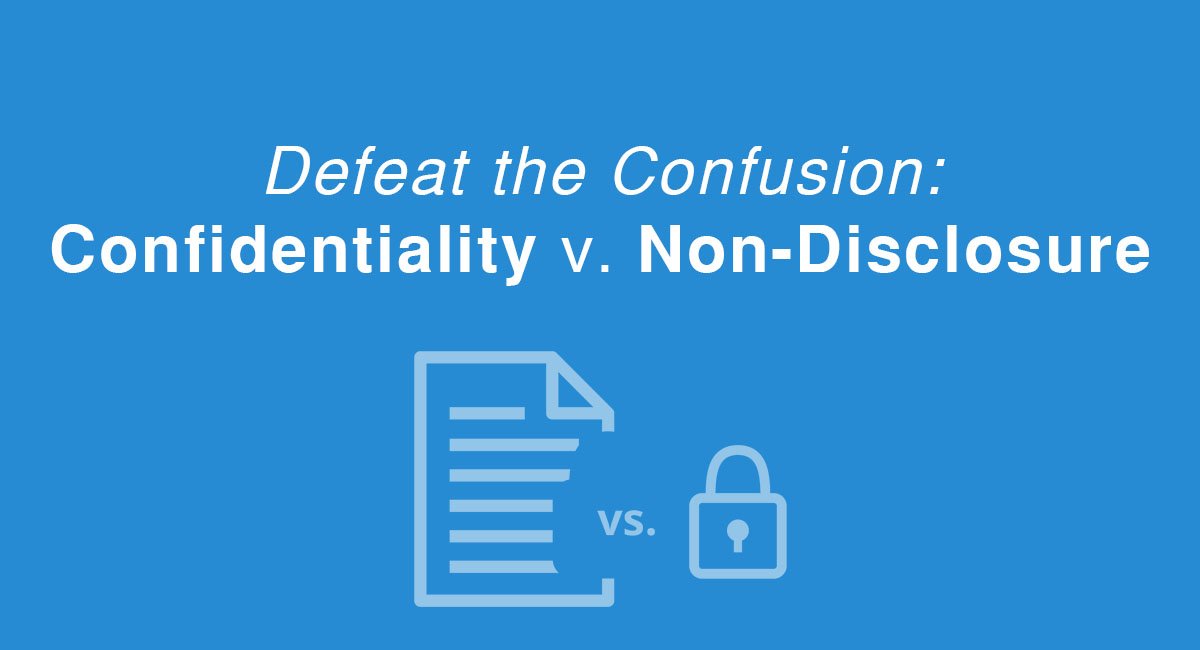 The terms confidentiality agreement and non-disclosure agreement are thrown around enough it is impossible for laypeople to assess whether they are the same thing or different from one another.

Each name arises in different settings and industries which only extends the confusion on this issue.

Confidentiality and non-disclosure agreements address the same subject matter which is the protection of information. Any differences between the usage of each title are subtle and have more to do with the parties to the agreement than anything required under the law.

This overview will discuss these subtleties and help you determine whether your current confidentiality documents offer the protection you require.

Using “confidentiality agreement” to name this kind of legal document over the “non-disclosure agreement” is frequently a matter of preference.

It’s not uncommon for this agreement to contain both names, like the example below from the Accuride Corporation agreement: 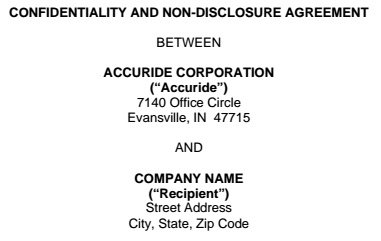 The subject matter in your agreement is the same no matter the name of the agreement used.

A contract referred to as a confidentiality or non-disclosure agreement deals with handling proprietary information.

It can be unilateral where one party is held to not disclosing the information.

An example where an unilateral agreement comes into play would be an inventor who is raising capital. Its purpose is to prevent the potential investor from prematurely releasing information about the new device or concept being developed. Since the inventor in this scenario is not privy to any private details of the investor, holding both parties to secrecy is not necessary. In this case, a unilateral agreement suffices.

However, if the inventor is pursuing a partnership with an investor who might have ideas for improving a device or concept, the non-disclosure or confidentiality agreement should be bilateral or binding on both parties. In this example, both the investor and the inventor have information they need protected.

The bilateral agreement holds both them to secrecy with provisions for relief should one of the break confidence. That relief could include monetary damages, injunctive relief to stop further disclosure, and even instant cancellation of any commercial transactions between the parties.

Preferences over the name

Even though laws do not distinguish between confidentiality and non-disclosure agreements, there are still patterns to the preferences for this agreement’s title.

Many of these may be out of habit more than any productive reason, but they continue strong with little opposition.

The difference becomes one of context rather than content. Factors that may control the use of one name over the other can include:

None of these are rules or requirements. They simply show patterns in usage. Many of these differences are nearly immaterial.

Also, even if these patterns are common, they are not exclusive.

There are American companies that will use “Confidentiality Agreement” and even “Confidentiality and Non-Disclosure Agreement.” When you see either name (or even both at the same time), your safest course of action is to assume that it involves protecting information and to proceed on that assumption.

What’s more important in this agreement

Since the name carries little weight in these contracts, focus needs to be on the content of the agreement.

To be effective and enforceable, confidentiality or non-disclosure agreements must contain certain information.

There are common mistakes that arise when people rely on boilerplate agreements and fail to customize each agreement to the particular situation.

As a start to avoiding the most obvious errors, start with the basic elements that are present in all contracts of this type.

This information sets out necessary parameters that allow for agreements to be clear and enforceable.

The basics of the agreement

The basic elements of these contracts are normally present in most boilerplate forms. However, you still want to check your forms for them as people tend to overlook the obvious.

These are frequently so obvious as to be overlooked.

Parties signing this kind of agreement may also form this elaborate agreement but never designate relief in case it’s breached.

There’s little advantage to an agreement if a wronged party is not guaranteed some means of compensation, even if that is to merely end the contractual relationship as stated in the agreement.

These legal agreements also integrate terms and clauses that you will need to consider based on the circumstances and reasons for having this agreement.

These clauses are very customized and unless you have a boilerplate for a previous similar situation, these elements need to be revised each time you sign a confidentiality and/or non-disclosure agreement.

Here’s an example of a “Controlling jurisdiction” clause in an NDA:

When it comes to these agreements, the content is the same but the name is different. It can vary between companies, countries, industries, and even individuals.

The place where you need to keep your focus is on the required elements and any extra provisions necessary for your transaction.

As long as your agreement contains the correct provisions, it will not matter what your name preference is for your confidentiality or non-disclosure agreement.