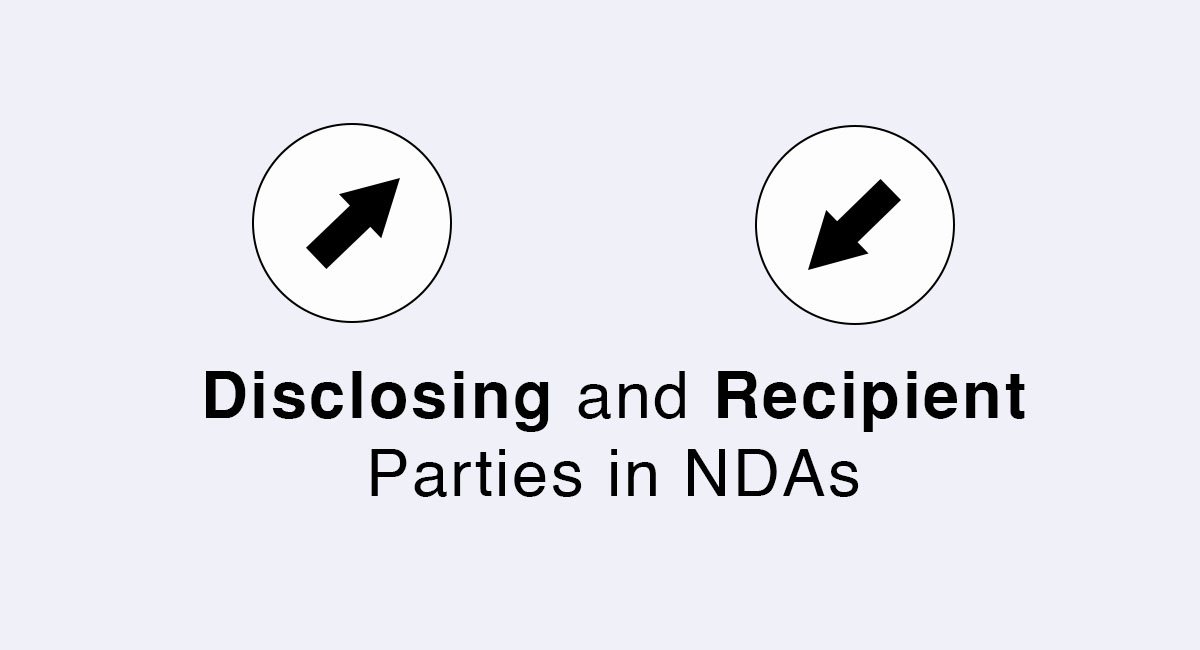 A Non-Disclosure Agreement, shortened as an NDA, is invaluable when it comes to protecting your business confidential information and trade secrets.

Like any other legal contract, NDAs require that certain elements be met in order for the contract to be valid and enforceable. These are known as the “Elements of a Contract.”

For the sake of being legally precise here, the “Restatement (Second) of Contracts” defines the four necessary elements of a valid legal contract as:

While these four elements are necessary for a contract to be binding and enforceable, a solid legal contract should consist of a few more details in order to eliminate the possibility of disputes down the road over interpretation and scope of the agreement.

Arguably, the most important component of an NDA is the clear identification of the parties. Contract law defines most parties to a contract as the offeror and the offeree.

When drafting and signing these kind of legal agreements, however, the parties are called the Disclosing Party and the Recipient or Receiving Party.

That’s because an NDA varies slightly in substance and purpose from other legal contracts. Defining the parties who are “in the know” and subject to the terms of the NDA is critical.

As you may well know, a contract is typically created for the purpose of one party making an offer and the other party accepting. Kind of a “Deal or No Deal” type of situation. (Hence the offeror and offeree identification.)

The parties come to an agreement, a promise is made, and something of value is given in exchange for the promise. A contract is born.

An NDA, unlike other formal contracts, doesn’t necessarily include an exchange of goods or services. In other words, the consideration is slightly different.

The agreement (which sometimes can be known as a Confidentiality Agreement) is one party’s promise to keep a secret. Nothing of monetary value is necessarily guaranteed in exchange.

One party is quite literally just agreeing to keep quiet because, during the regular course of doing business, such as employment, partnerships or negotiations, they will be privy to confidential information or trade secrets that you don’t want being leaked to the public or your competitors.

Because of the unique nature and purpose of these kind of legal agreement, there are some distinctive elements required to producing a sound NDA that will truly secure your business secrets and reputation:

Who are the Parties involved?

As I noted earlier, there are two central parties to an NDA: the Disclosing Party and the Recipient or Receiving Party.

In a non-mutual NDA (or unilateral), only one party is disclosing confidential information.

Examples of non-mutual agreements can be employee contracts or when you’re pitching an idea to a possible investor and want to make sure they don’t take your ideas and run.

In these cases, you’re the only one putting something private out there and taking a risk of a secret being leaked.

Mutual NDAs, on the other hand, aren’t quite so cut-and-dry.

In a mutual agreement, such as when two firms are considering a merger or when two companies are collaborating on a project, both parties are the Disclosing Party and the Recipient Party. Both parties, at some point during negotiations, will be sharing sensitive information with the other party.

As a result, the NDA you’ll draft and sign should be very clear about who’s who and in what capacity. It doesn’t need to be complicated: just make sure the agreement is organized so that there’s no confusion about which party is revealing what secret.

If the courts ever need to get involved, this can be significant.

What are the roles of the Parties?

As the Disclosing Party, your only role, really, is to take the bull by the horns and make sure that the NDA is properly written and executed before you ever reveal a thing.

Especially if it’s a one-way agreement type of situation. You’re the only one taking a risk, so don’t expect the Receiving Party to go out of their way to help you cover your butt.

Get the agreement in writing and don’t reveal a thing until it’s signed.

The Recipient Party, on the other hand, has some obligations and responsibilities here.

The Recipient, if you recall, is making a promise to keep a secret. By signing the agreement, they’re agreeing to hold the information or trade secrets in confidence and, in many cases, limit their use.

For example, your employees may be privy to certain company trade secrets in order to market your services or sell your products.

That said, an NDA these employees will sign when you hire them would limit their use of the trade secrets to those activities that are directly related to promoting your business.

Here’s an example. In this example below, the Recipient is required to destroy or return the confidential information upon the request of the Disclosing Party:

Under these kind of legal agreements, the Recipient Party is obligated to do his or her best to protect your company’s private information to the best of their ability, limiting their use of the information and only exercising it for business-related purposes as outlined in the Agreement.

Who are the third-parties?

Earlier I used the “central parties” term. But that means there could be others.

When preparing your NDA and defining the parties involved, consider who else might be a party other than yourself and the Recipient.

Does the Recipient intend on have their employees, partners or investors review your private information? Will there be a company unrelated to the Recipient party, such as a third-party developer, who needs to see the information?

Whatever the case may be, third parties are often involved, at least in some small way.

Neglecting to include them in the agreement AND having them sign it, could just be the loophole that leads to your troubles down the road.

Clearly defining all parties involved in an NDA can be the difference between a meaningful, durable agreement and a leaked secret.

Be sure to cover all your bases by clearly defining the Disclosing Party, the Recipient Party, any third-parties and their obligations under the agreement.