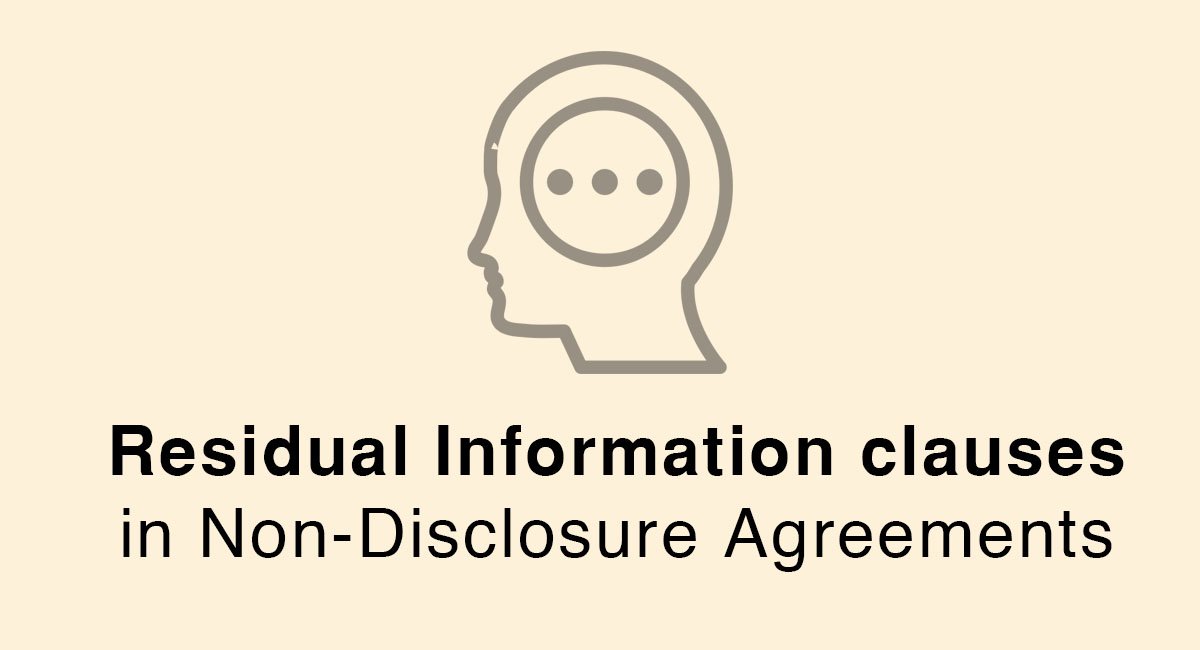 Ah, the residuals clauses. Now, this is an interesting topic.

A fairly recent trend in the world of non-disclosure agreements, residuals clauses strike at the very heart of confidentiality agreements and make us question everything about them.

It’s about finding the delicate balance between the true spirit of an NDA and our own human nature to remember, learn and improve.

Residual, by definition, simply means leftovers. It’s what remains after we’re done with something.

In the world of confidentiality agreements, residuals are those bits and pieces of information that the Recipient Party retains through memory long after the project or business deal is complete.

It’s lingering knowledge and naturally retained information that they can’t simply toss out of their brains.

A residuals clause, then, stipulates that “residual information” is excluded from confidentiality obligations.

To put it another way, if, through the process of working with the Disclosing Party’s IP and other confidential information, the Recipient Party learns from the disclosed IP, memorizes it and/or makes general improvements or developments to their own work because of it, they will have the right to use the “residual information” without violating the terms of the NDA.

According to patent attorney Larry Schroepfer, the argument behind the residual clause is reasonable:

The argument is that we all learn by doing and people cannot and should not be forced to try to ‘segment’ their brains when it comes to what they know.

To be fair, we’ve all, in our respective careers, learned by watching and doing. We’ve seen a colleague do it one way with great success and mimicked their methods to improve our own.

Or we’ve read some tidbit from an industry leader and immediately applied the knowledge to our own work. At other times, it’s simply a matter of experience – the more we do, the better we get.

This natural process of learning and improving is at the very heart of the residuals clause. There is a recognition that some memory and learning simply can’t be undone. The business world is increasingly utilizing the residual clause in acknowledgment of that fact.

But at what cost? While gaining popularity in some circles, the residuals clause is widely mistrusted among many, and experts have plenty of fair warnings before signing a non-disclosure agreement that contains a residual information clause.

Does a residual clause constitute a trade secret license?

Many argue that a residuals clause completely defeats the purpose of an NDA.

Others claim that it has it’s placed, so long as you understand it and use it fairly. Ultimately, it’s usefulness is probably going to depend entirely on whether you’re doing the disclosing or the receiving.

Here’s an example residual clause within an NDA:

Despite the fact that the exact wording stipulates that the clause does not grant a license, according to at least one expert, this residual clause is basically a trade secret license in disguise.

Other writings on the subject acknowledge the general idea behind the residual clause, arguing that they aren’t a flagrant trade secret license, so long as your verbiage is carefully drafted and stays on-point.

A 2003 federal court in Lexington, KY made a ruling on this issue, in fact, essentially finding that the Disclosing Party blew it when they signed a series of confidentiality agreements, many of which included blatant language about the use of retained information.

The Plaintiff argued that a contract existed which should have required the Defendant (the Recipient Party) to maintain ultimate confidentiality. But a court found that the signed confidentiality agreements included very clear language that constituted a trade secret license.

As with most court cases, the details are lengthy and complex. For our purposes here, however, the important thing to note is that the court ruled in favor of the Recipient Party when a confidentiality agreement’s residual information clause language was so broad that it clearly favored the Recipient Party’s ability to use trade secret information.

When it was all said and done, the final verdict was that the Disclosing Party just made a really bad judgment call by signing a confidentiality agreement that kept their information anything but confidential – all because of one poorly-worded residual information clause. Or well-worded, I suppose, in the eyes of the Recipient Party.

Ultimately, the answer seems to be that, no, a residual information clause in a non-disclosure agreement does not automatically constitute a trade secret license – although it could, unintentionally, if you don’t watch the wording carefully.

Residuals clauses are heavily favored by Recipient Parties of an NDA and that’s often who initiates them.

If you’re the Disclosure and the Recipient proposes a residual clause, read the verbiage carefully to make sure that specific ideas are still carefully protected.

Additionally, many in the field note that larger, well-established companies, particularly those in technology industry’s, commonly use residual clauses in their dealings with smaller companies, although that’s not always the case.

Well-researched start-ups also prefer to include residual clauses in their NDAs with new clients. This allows them to learn from new clients in the early stages of growth without being at risk of violating some confidentiality obligations.

Rules of thumb when using this clause

While there is some support in favor of residual clauses, there seem to be more cons than pros and more warnings than praises.

Many IP and licensing attorneys acknowledge the reasoning behind the clause but argue that the practical application is another thing altogether. Striking the right balance between a Disclosing Party’s right to confidentiality and a Recipient Party’s right to learn and grow appears to be much easier said than done.

So, while the jury is still out on whether or not residual clauses within non-disclosure agreements are a good thing for business, there are some general guidelines you can follow.

Rules for the Disclosing Party

Rules for the Recipient Party

Despite their controversial nature, residuals clauses are likely here to stay.

There are a lot of blurred lines, and countless types of residuals clauses, so specific rules are difficult to establish.

When faced with the prospect of signing a non-disclosure agreement with a residuals clause, remember the rules of thumb above and always keep in mind that it’s a delicate balance between two very competing interests.

If you want to protect your business relationships, as well as your bottom line, be fair, but firm and always, ALWAYS read the language carefully.

Credits: Icon Thinking by Creative Stall from the Noun Project.