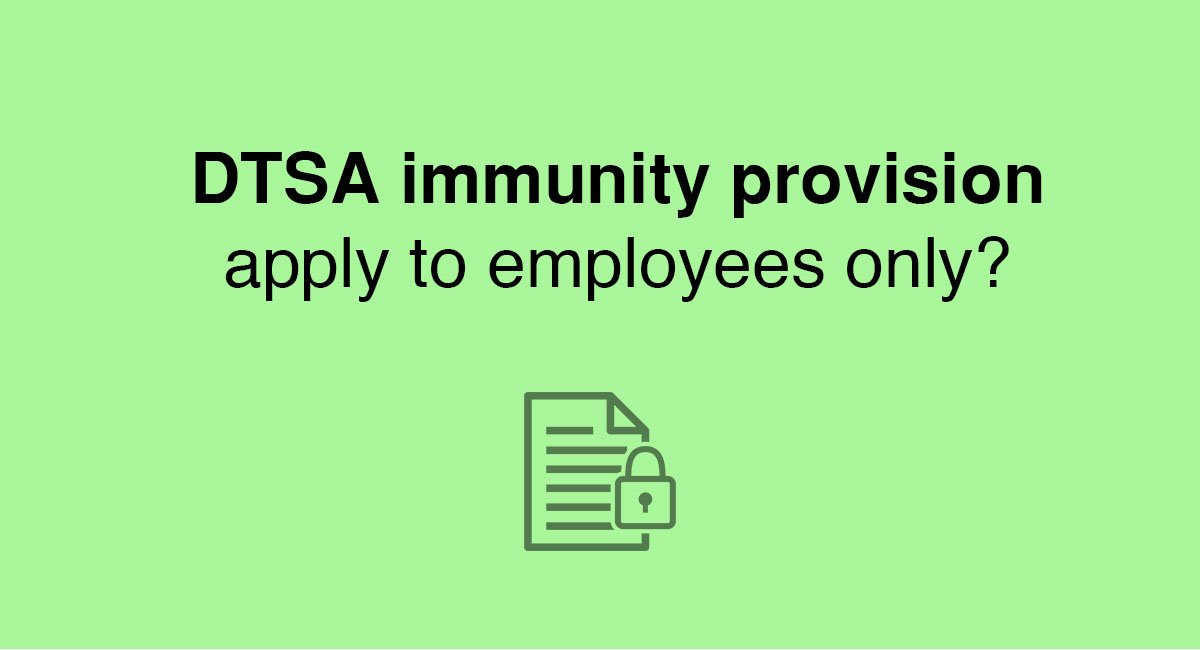 A trade secret is a special type of confidential information.

Not only does it confer a competitive edge to a business, but the law recognizes it as deserving of special protection and unlike a patent, a trade secret does not have to be registered on any public register to confirm its existence.

Civil applicants did however receive legal redress for any stolen trade secrets through state law in the 48 states that adopted the Uniform Trade Secrets Act (UTSA) or through common law where the UTSA wasn’t adopted (that is, New York and Massachusetts).

However, the UTSA was perceived to lack uniformity because of the varying levels of adoption by local states which could cause confusion, especially for a claim that was not limited to one particular state.

That is, until the introduction of the new Defend Trade Secrets Act 2016 (DTSA) which has now become law since President Obama placed his signature of approval on the proposed legislation on May 11 2016.

From May 12 2016 onwards, the DTSA benefits and requirements came into play. The DTSA does not preempt the UTSA but it does provide another option for civil applicants to be able to file their grievances in federal court.

The DTSA has been amended to reduce the limitation period for initiating a private civil action for trade secret theft from five years to three years to bring it in line with the UTSA.

The statute of limitations starts from the date on which the theft is discovered or the date that the theft should have been discovered if reasonable diligence had been used.

So why is the DTSA significant when it comes to the protection of trade secrets if you’re a CEO, entrepreneur or business owner?

Well, firstly as mentioned before, it gives you an added option to file your claim in the federal court rather than being limited only to state courts.

Secondly, 18 U.S.C. § 1836(b)(2)(A)(i) DTSA provides for ex parte orders “providing for the seizure of property necessary to prevent the propagation or dissemination of the trade secret.”

In other words, if you believe that someone has stolen your trade secrets, you can apply for an order to seize property to prevent the exposure of your trade secret, without giving the respondent an opportunity to defend or hide the information.

As you can imagine, such an order is extremely powerful and can result in severe damaging consequences if abused and because of that, Congress placed some stringent requirements before such an order will be given.

Here are the conditions that have to be met before an “ex parte seizure order” will be given by a court: 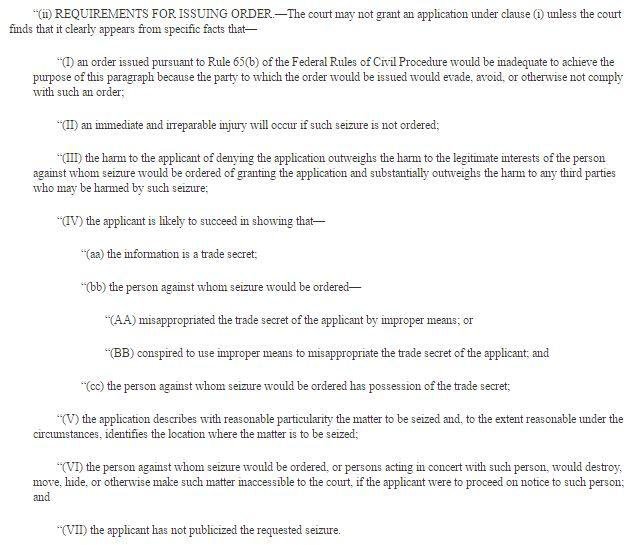 Besides the ex parte seizure order, other remedies that are available under the DTSA include:

The last two remedies, exemplary damages and attorney’s fees are only available to an applicant if they meet the immunity disclosure requirements of the DTSA as detailed below.

One of the distinct differences of the DTSA from the UTSA is the introduction of immunity protection for whistleblowing employees who disclose trade secrets of their employer in confidence to a federal, state or local government official or to an attorney for the “purpose of reporting or investigating a suspected violation of law.”

The whistleblower will receive immunity protection both from civil and criminal liability. This immunity needs to be disclosed to employees in all contracts containing trade secret or other confidentiality obligations. 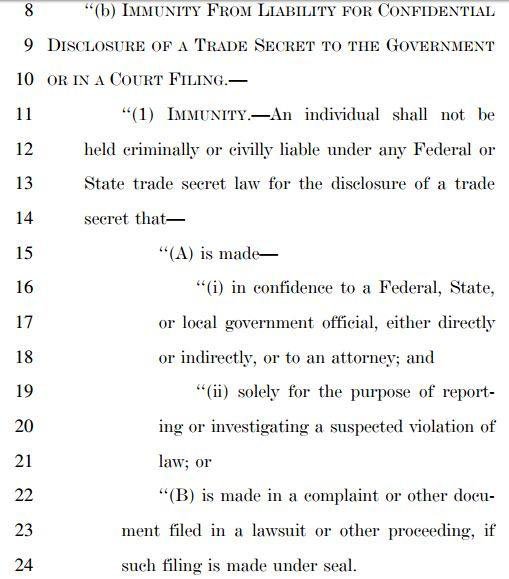 The DTSA also provides immunity to whistle-blowing employees who file a lawsuit because of retaliation by an employer for reporting a suspected violation of law.

This immunity covers any of the whistleblower’s trade secret disclosures that are made to the individual’s attorney and also disclosures made through filings in court proceedings, as long as the disclosure is made under seal and the trade secret is not exposed, at least not without a court order to do so. 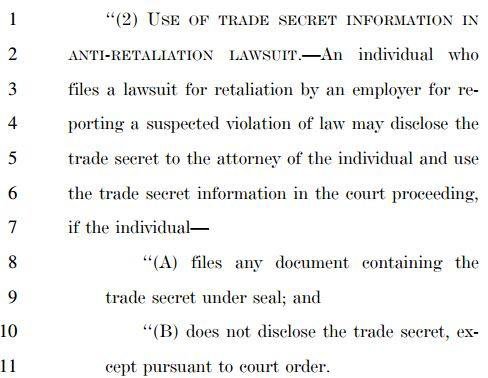 The DTSA requires that employers must provide notice of the immunity disclosure “in any contract or agreement with an employee that governs the use of a trade secret or other confidential information.”

Non-disclosure agreements are a common type of agreement that is drafted specifically for creating confidentiality obligations.

As this provision can be quite extensive to fit into an already long agreement, as another option, an employer can provide a cross-reference to a policy document that informs the employee of the immunity that is provided under the DTSA for reporting suspected legal violations.

The DTSA does not require the immunity to be added retrospectively into existing agreements, but only to agreements that are entered into or updated from March 12 2016, after the law was formally approved by President Obama.

For now, it’s not clear whether employers with agreements that was signed prior to the enactment date and that don’t have this immunity provision can qualify for exemplary damages and attorney’s fees under the DTSA in the future.

The DTSA states that the definition of “employee” includes any “individual performing work as a contractor or consultant for an employer.”

This means that the immunity provision would apply to an individual, contractor or consultant that is doing work for you.

At this point it’s not clear whether a company (such as a consulting company) would be considered an “employee” as defined in the DTSA.

In any case, to cover all your bases, it makes sense to include the immunity disclosure provision in all your contractor and consulting agreements, whether it’s with an individual or a company.

If you fail to include the immunity disclosure provision in your agreements from now onwards, not only do you lose the option of claiming for exemplary damages and attorney’s fees if your trade secret confidentiality was ever breached but also you could tip off regulators like the Securities and Exchange Commission (SEC) who like to scrutinize workplace practices that they deem are stopping or intimidating legitimate whistleblowers from making any reports of legal violations.

On top of this, there’s a risk that a court could interpret your refusal to incorporate the immunity disclosure provision into your existing agreements as evidence that you don’t have a genuinely valuable trade secret to protect.

Because if you did, why wouldn’t you want to avail yourself of the extended damages and attorney’s fee available under the DTSA?

To take full advantage of the remedies available to you under the DTSA and for other reasons mentioned above, any new non-disclosures agreements or contractual updates to your current non-disclosure agreements that you make from now onwards should include the immunity disclosure provision.

Try to make the coverage and explanation of the immunity disclosure provision as extensive, detailed and clear as possible.

Your current onboarding and offboarding processes should be examined to ensure that your trade secrets and other confidential information are still receiving an appropriate amount of protection.

Employees should receive training on how to handle confidential information and your current trade secret policies and procedures should be reviewed as well.

On top of this, employees should also be informed in training sessions about your whistle-blowing policies including who they can contact if they have any concerns about suspected legal violations. You should remind them in these trainings that they are protected by immunity for any disclosures concerning such legal violations and keep a record that you have mentioned this.

The more vigilant you are and the better your company policies and procedures when it comes to trade secrets and confidential information, the easier it will be for you if and when your confidentiality is ever breached and you need to seek legal redress.

And without a doubt, unless you are a legal expert, you should be seeking professional advice from an attorney or other legal professional to assist you in this process to ensure that you have complied fully with the DTSA requirements.

The 5 No’s of Confidentiality Agreements