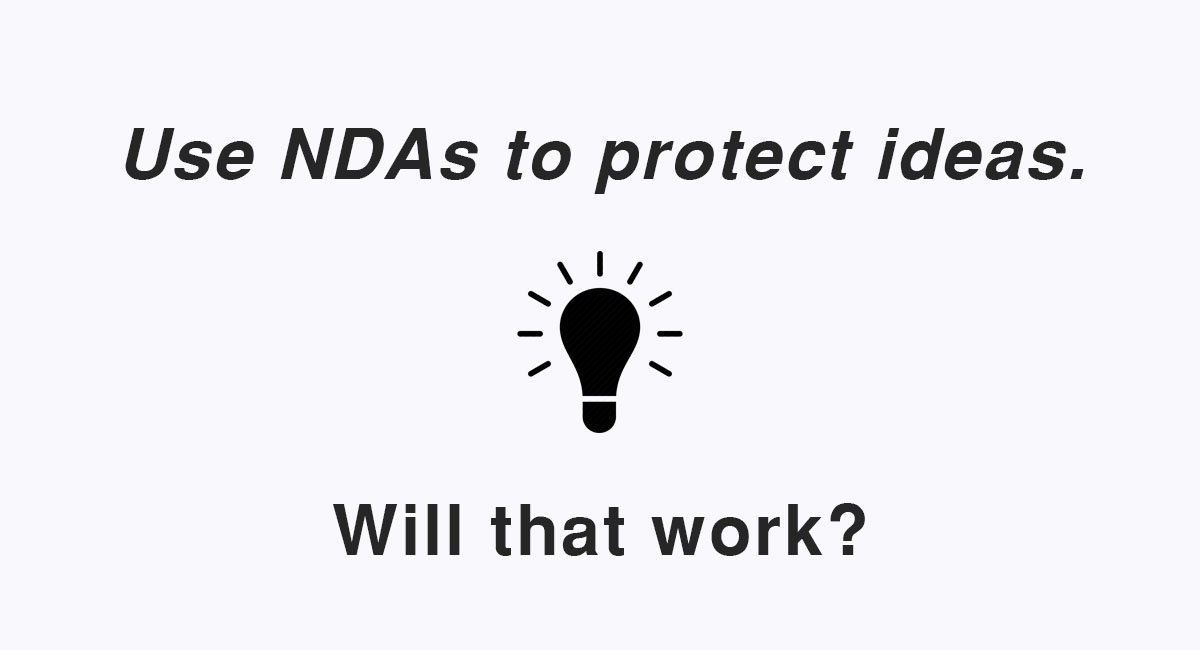 Among the many uses of a Non-Disclosure Agreement (sometimes called an NDA) is the protection of “Intellectual Property.”

By definition, an NDA agreement is a simple contract compelling two or more parties to keep certain pieces of shared information confidential and private.

Typically, the confidential information is shared during the course of normal business dealings such as negotiations, partnerships, employment, etc.

Can You Use an NDA to Protect an Idea or Concept? from EveryNDA

What is Intellectual Property

The law has long recognized the notion that ideas are “property” and entitled to legal protection.

Known as Intellectual Property (IP), it’s the area of law that makes it possible for authors to copyright their books, engineers to patent their designs and brands to trademark their images and logos.

IP Law makes it very clear, however, that an idea is only subject to legal protection if it’s been published in tangible form. In other words, the law focuses on protecting ideas that have been expressed in some physical fashion.

So, if you’ve got a logo or product idea in your head, good for you, but the law doesn’t really care. Now, put a rough sketch of that idea down on paper, and then we’re talking.

How NDAs are used

NDAs often center around some piece of intellectual property, such as proprietary information, confidential documents, novel inventions or designs, trade secrets, copyrighted works, and so on.

In fact, many of today’s most successful entrepreneurs and largest corporations will insist on executing and signing the agreement before discussing a partnership, merger or joint venture.

It’s one of the most appropriate uses of an NDA. If the deal goes sour, they want to make sure that the forthcoming products they shared during the negotiations and discussions are safe and won’t suddenly appear on the other company’s product line.

Or, it might ensure that their trade secrets remain as such so that their once loyal customers don’t end up jumping ship.

Along those same lines, most big name brands won’t pitch an idea to a developer without providing the agreement first.

From new-invention-marketing.com, here’s a sample clause that you might find in an NDA designed to protect your intellectual property:

To emphasize how valuable an NDA can be in protecting your intellectual property, take the case of Johns Hopkins University.

All of their researchers are required to sign these agreements upon hiring in order to protect Johns Hopkins unfiled patents, business plans and other classified (and highly coveted!) information.

But, can one NDA protect an idea?

In other words, the law specifically differentiates between an idea that’s just an idea, or a concept rolling around in your head, and an idea that has actually been expressed in a physical way.

Let’s just say, for the sake of discussion, that you have an idea for a machine that you believe will solve the world’s water crisis.

It’s been stuck in your head for months and you can’t seem to let it go. If you could make that idea a reality, not only would you save your sanity, and probably make a fortune, but your name would likely go down in history, too.

But will an NDA really protect your concept? The simple answer is no.

Let’s say that you did tell your friend that you had an idea you wanted to discuss with him, but before you do, you’d like him to sign an NDA.

This would likely fail you miserably on two fronts.

First of all, most professionals agree that asking him to sign the agreement in the first place would be a huge turn-off for him and he may not even want to hear what you have to say. It’s almost as if you’re accusing him of doing something wrong before he even knows what you want to talk to him about.

Not only that, but the likelihood that he would steal your idea, take the time and money to develop it, pitch it to investors, sell it for a fortune, and leave you in the dust is low. Not that it’s impossible, or hasn’t ever happened, but stealing ideas is much more difficult than you might think.

Finally, and more to the point, your idea is just an idea and no matter how well-worded your NDA may be, your idea is afforded no protection under the law until you have established or conveyed the idea in tangible form.

Then, and only then, will it be considered intellectual property in the eyes of the law.

Even if your friend was willing to sign an NDA, it would likely never hold up in court because the agreement is designed to protect actual intellectual property (tangible!) not just an idea in your head.

You’re left with two options for preparing your idea for the possibility of sharing, discussing it and, hence, making it worthy of using this kind of NDA.

First, apply for a patent, trademark or copyright.

Patent law, for example, doesn’t even require that a prototype be built in order for a patent to be approved.

All you have to do is be able to describe your idea in such a way that others could make and use it. It also has to be novice or unique in some way. It could even be an improvement upon an already existing idea.

Once a patent is issued, then you’re completely within your rights to request that an NDA be signed before talking to developers.

Your other option for ensuring that this kind of legal agreement will actually do you any good, is to put your idea into an identifiable format, like we discussed earlier.

In other words, document it, write it down, sketch it out, type it up, whatever. Just get it into a physical format so that the law will recognize that your idea is no longer a mere idea, but an actual piece of “intellectual property” that’s afforded protection under the law.

If you’re trying to write the next great American novel, it doesn’t have to be published and bound or available on Amazon before it’s afforded legal protection. You can simply scratch it out on a napkin, if you want, so long as you can prove that you wrote it and when.

When it’s all said and done, these kind of agreements are a profoundly important part of doing business because they protect what keeps business and commerce going.

In order for your NDA to be relevant, though, you have to make sure that your “idea” has either been hashed out on paper, plastic, metal, or code, or that you’ve sought protection through the relevant patent, copyright or trademark offices first.

An idea is just an idea, after all. But an idea that we can “see” is “intellectual property.” And that makes all the difference when signing this kind of legal agreement.