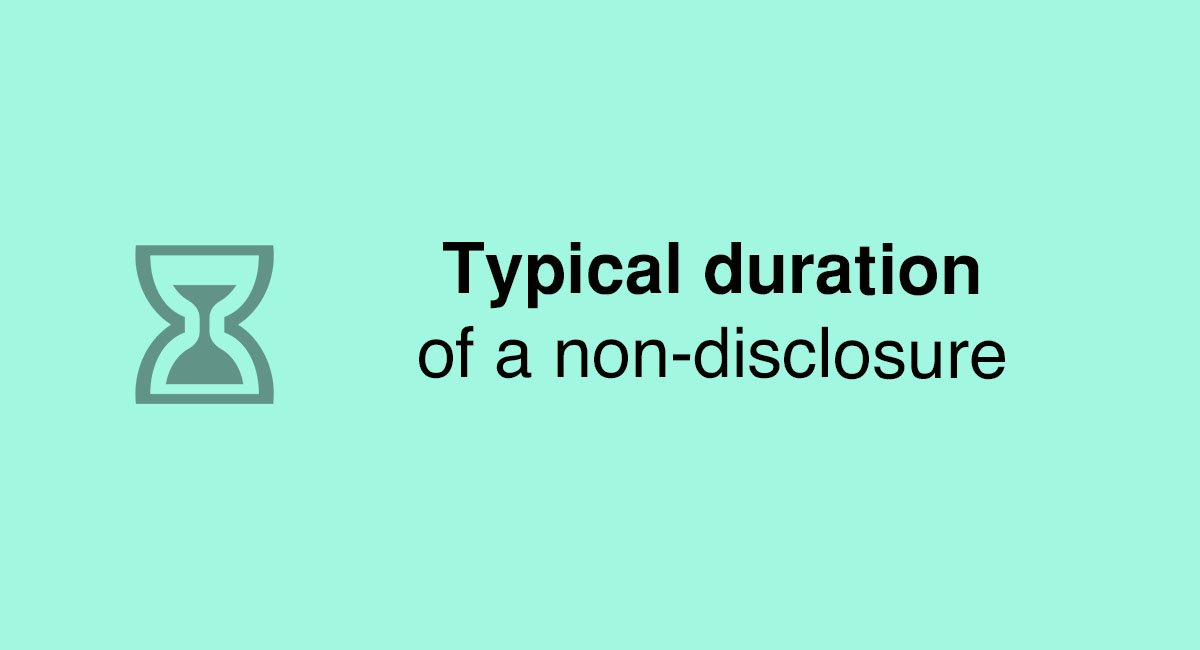 As with all things legal, the “typical” duration of a non-disclosure agreement is anything but typical.

There’s no boilerplate timeframe for how long a non-disclosure can or should last and the specific timeframe will depend entirely upon the details of the agreement, the preferences of the parties involves, the relationship between the parties, and a number of other factors.

So, ‘how,’ you might be asking, should you go about determining the duration of your non-disclosure agreement?

The most critical of factors is the nature of the information being protected and this should be your first consideration.

Under common law, trade secrets are protected until they are no longer considered a trade secret.

That means there’s no expiration date, no deadline and no point at which it automatically becomes public information.

Let’s back up here for a moment and define a ‘trade secret.’

Copyrights, trademarks and patents can all be registered with the proper office, giving them protection without the need for secrecy or confidentiality.

A trade secret, on the other hand, is an alternative to patent filing. The key advantage to a trade secret is that a patent expires, but a trade secret can remain a secret indefinitely. There’s no expiration and your company can maintain the secrets of your trade for as long as you like.

The U.S., like other member countries of the World Trade Organization (WTO), base their trade secret laws off of the Agreement on Trade Related Aspects of Intellectual-Property Rights (TRIPS).

Members and parties to this Agreement define a trade secret as information that can include recipes, formulas, patterns, programs, methods or processes. The information in question must be used in business and must give the owner an opportunity to gain an economic advantage over competitors who don’t know of or use it.

Now, back to our non-disclosure agreement.

Like I said, information that qualifies as a trade secret is protected by common law indefinitely.

But don’t neglect the duration of your trade secrets in your non-disclosure by counting solely on common law to protect you.

If the subject of your agreement is a trade secret, it’s better to be safe than sorry by setting a term limit which states that the Recipient Party must maintain the confidentiality of the trade secret until the information no longer constitutes a trade secret.

This may be stating the obvious, but it’s important to define this clearly, especially if other aspects of the agreement have a different term limit or expiration date or if the business relationship itself is temporary.

An important differentiation with non-disclosure agreements is that some are terminating while others are non-terminating.

(Pay close attention here because this is one of those cases where language in law can either make or break you – and most definitely confuse you!)

Terminating non-disclosure agreements take effect on a very specific date and end either on an explicit date or within a detailed timeframe, depending on particulars that we won’t get into here.

What can get confusing, and where you need to draft your language carefully, is that ‘term‘ and ‘duration‘ can mean the same thing and are sometimes used interchangeably.

“Term” can mean either the length of the relationship or the duration of the confidentiality, which aren’t necessarily the same thing.

In other words, if you’re drafting an agreement for use during the development of a project, your relationship with the developer may end once the project is complete, but you may want the confidentiality of the information you shared to remain confidential for a longer period of time – such as when the product actually hits store shelves.

In this case, you would want to specify that the term of the relationship is different from the duration of the confidentiality.

“Term” seems to be the preferred word of choice when discussing the length of the relationship, while “duration” is favored as the timeframe for maintaining confidentiality.

You may interchange these, however, so long as you’re very clear. The key point to remember is that whichever word you choose, make sure to use it consistently.

Non-terminating agreements, on the other hand, don’t terminate. (Duh.) This can mean one of two things, though.

Either the business relationship is ongoing and perpetual OR the confidentiality of the proprietary information is permanent, such as the trade secrets we discussed earlier.

Non-terminating agreements are useful for ongoing relationships or the protection of trade secrets and other information that should remain proprietary indefinitely.

In this example from Iowa State University business resources page, the non-disclosure agreement is signed between two parties that anticipate an ongoing relationship that can only be terminated in writing by one of the parties.

The point I’m hoping you’re getting here is that the term of a non-disclosure agreement and duration of confidentiality are generally two very different things and must be carefully handled within your agreements.

One way you can clarify your intentions is to include a “Duration” clause.

There are different schools of thought on this, but if your confidentiality and non-disclosure requirement should expire at different times, then a specific duration clause may be the best way to differentiate the two.

A sample “duration” clause is as follows, from ShakeLaw:

While the inclusion of a “Duration” clause may seem obvious, it’s not always necessary.

“This Agreement and the parties duty to hold confidential information in confidence shall remain in effect until __________.”

For the sake of clarity, “terms” here refers to the length of time that a non-disclosure agreement is valid.

The business and legal worlds like to think in terms of years, so these agreements are often established for a period of 1, 3, 5 or even 10 years. Depending on the purpose of the business relationship, this gives the parties time to collaborate or negotiate as well as leaves time to tie up loose ends.

The terms of your agreement should be realistic about how long the project or collaboration will take.

Joint ventures, for example, may last for years, while a one-time development project may last no longer than a year.

Because of the inherently sensitive nature of these kind of agreements, it’s best not to ignore the importance of the terms. Leave yourself time to properly conduct business but don’t linger, giving the Recipient Party more time than is necessary to access your proprietary information and trade secrets.

The longer they have access past the point of necessity, the higher your chances of a facing a breach.

Often during the negotiation of a non-disclosure agreement, one party (usually the Recipient Party) wants to put a time limit on the confidentiality duration.

Obviously, as the Disclosing Party, this is to your detriment but some Recipient Parties will be sticklers and refuse to sign this kind of agreement until the confidentiality duration is limited.

Disclosing Parties, who are in a pinch, often feel like they’re not in a position to push the issue of indefinite confidentiality and end up settling on a limited duration.

While some legal experts say this is an expected and acceptable part of doing business, others claim that Disclosing Parties should stand their ground and refuse to sign a non-disclosure agreement that includes time limits on the confidentiality of their information.

While it’s not for me to advise on best practices in that regard, I will so bold as to say that, at the very least, you should never relax your Recipient Party’s unlimited obligation to maintain confidentiality of your trade secrets.

While this may not have been the clearest of answers, the key take-away here is that the “term” of an NDA and the “duration” of the obligation to maintain confidentiality are two separate issues which should be clearly addressed and clarified in your agreement.

And while every non-disclosure agreement is as unique as the parties and the agreement involved, terms of 1 – 10 years are standard, with the duration of confidentiality lasting indefinitely on trade secrets and as long as possible (or as is necessary) for other forms of IP.

Credits: Icon hourglass by Jamie Rothwell from the Noun Project.