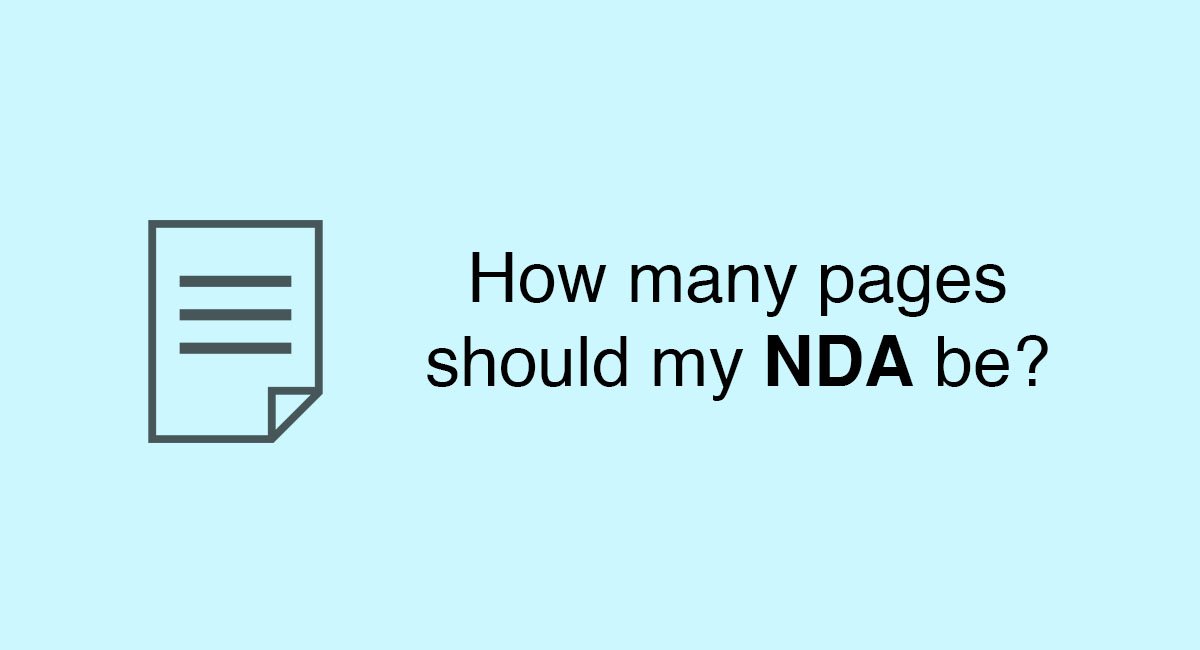 So, you’re preparing an NDA (a non-disclosure agreement) and you want to know, “How many pages long should it be?”

Not an uncommon question – this is asked about many-a-legal contracts, especially if it’s a contract you’ve never dealt with before.

You want to know how lengthy the contract needs to be in order for it to be solid and protect your business interests.

Fair enough. Let me just start off by telling you, though, that you’re asking the wrong question.

See, the length of an NDA , as with any legal contract, is irrelevant. It’s the content of the agreement that matters.

Personally, I have seen NDAs as short as one page while others were upwards of 10+ pages. It really depends on:

In order to answer your question in more detail, though, let’s start with the beginning and work our way through a few main clauses of a typical NDA.

Also referred to as a Confidentiality Agreement (for obvious reasons), these agreements are regularly used by businesses with valuable trade secrets or other intellectual property that’s pertinent to the success of their business.

Independent contractors and freelancers have been known to use them from time-to-time.

Employment contracts often include a non-disclosure clauses (instead of individual agreements), as well, binding employees to keep an employer’s trade secrets confidential.

Not every business dealing or piece of information is confidential.

This is important to note because NDAs are often misused by business owners or entrepreneurs who don’t understand their purpose or context.

If you hire an employee who is privy only to public information about your company, then it’s rather pointless to have them sign an NDA.

If, however, you contract a smaller business whose operatives will have access to your client-base and unpublished patents, then, yes; by all means have them sign the agreement. In fact, please do. Because that’s exactly what an NDA is for.

The point is that these kind of agreements were designed to protect your intellectual property. IP is what sets one company apart from the other and makes healthy competition possible.

So, before you whip out an NDA and ask someone to sign it, ask yourself if they’re really going to be privy to confidential information that must remain confidential for the sake of your company’s survival.

If the answer is no, then you probably don’t need the agreement.

As I mentioned, every NDA is unique.

Some are extremely straightforward and cover nothing more than a basic list of the parties, a simple scope of what information is considered confidential under the agreements, the terms and conditions and that’s that.

While there are situations where this will suffice, some business dealings are a bit more complicated and most attorneys would recommend that your NDA reflect that.

Here, I’ll go over a few of the most important components to an NDA, and a few others that depend on the parties involved, which, perhaps, will give you a better idea of just how long your agreement might be.

Definition of the Confidential Information

So, obviously a “Confidentiality Agreement” means very little without a clear definition of what is considered confidential for the purposes of the agreement.

The trick with creating a solid definition here is to be as clear as possible about what information you’re disclosing that’s “privileged” without being so specific that you inadvertently leave something out.

It’s a fine line to balance, I know. That means that a two sentence definition may be just fine under certain circumstances.

In other situations, such as a complicated merger between several parties, the definition of confidential information may go on for quite some time.

In this example below, this NDA simply defines a “Trade Secret.” While it’s a very clear definition, few attorneys will recommend that you use this one definition without clarifying or making note of how it applies to the specifics of your agreement.

This is another clause of your NDA that may seem straightforward, but you really should give it some more thought.

Obviously, there are at least two parties that will sign the agreement. Where you have to be careful is in making sure that you’re thinking about any third parties or affiliate parties that may be involved as a necessary part of doing business.

Employees, contractors, accountants, attorneys, etc. should all be taken into consideration.

As far as length, this clause shouldn’t be too extensive.

Simply make clear who the main parties are and, when it makes sense, include some verbiage asserting the fact that the NDA also covers third parties necessary to doing business.

It’s also worth it to note that most Disclosing and Receiving Parties to an NDA are clearly listed in the introductory clause of the agreement, such as the example below.

Once the main parties are noted, it’s advisable (by most legal professionals) to include something like this to cover third parties when appropriate to your situation.

In this particular instance, it’s stock and shareholders:

Sometimes divided into 2 separate clauses, the terms of the NDA can include what you consider to be acceptable use of the disclosed information as well as the intended use of the confidential information.

In other words, specify why you’re disclosing the confidential information in the first place but also leave some breathing room so that the party you disclosed the information to isn’t so restrained in their use that it makes the agreement impossible to uphold.

For example, you may require that a developer sign an NDA while in the process of preparing a product for public release. Once it’s released to the public, however, the information is obviously no longer a secret and therefore the signed agreement would no longer serve a purpose.

Creating a clear timeline for your agreement helps to avoid legal disputes down the road.

Again, this clause should be clear and concise without being so restrictive that it’s impractical. In this example, the terms and conditions section of that NDA covers nearly two pages.

Once the main components are out of the way, you’re prudent to focus on the logistics.

Including clauses that specify remedies, jurisdiction, responsibility for legal fees and the like, in case of a dispute, can help you to eliminate the possibility of a small disagreement turning into a full-blown legal nightmare.

These clauses need not be complex or lengthy, but should be fully agreed upon by both parties. Their purpose, really, is to create a fair agreement and one that encourages both parties to abide by the terms and hold up their end of the bargain.

Your NDA should never make it easy or advantageous for one party to file suit and should give fair protection to each party should a suit become unavoidable.

One such logistical clause may specify the governing laws.

Rather than focusing on the number of pages in your NDA, focus, instead, on making sure that it provides the type of protection that it’s intended to cover.

Your NDA should be thorough and, as the Disclosing Party, you want it to be broad – case a wide net, so-to-speak.

But don’t make it so constricting that your Recipient Party can’t realistically abide by the terms.

While your goal as a business owner is to protect your intellectual property, you should also aim to be as fair in your business dealings as possible. Plus, the courts have been known to negate an NDA for being overly restrictive – a situation you obviously want to avoid.

So, really, the moral of the story is to be thorough and fair when drafting your agreement. The number of pages may realistically range from 2 – 6 but that number is irrelevant, at the end of the day.

Credits: Icon Document by Anas Ramadan from the Noun Project.

How to Terminate an NDA