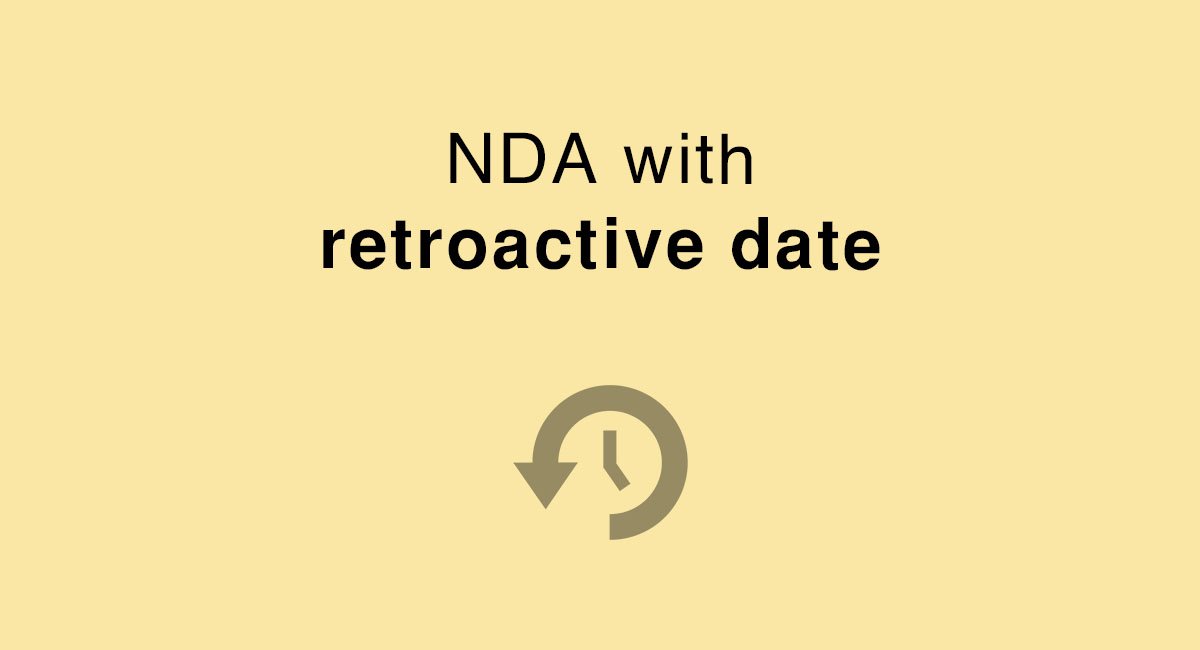 Hindsight is always 20/20 and so it goes in the professional world, as well. Sometimes our mouths move faster than our brains and business moves faster than our keyboards. The result, at times, is that business gets moving before a contract is ever signed.

Let’s be honest: in today’s high-speed world, it probably happens more than we’d like to admit.

So, many contracts and agreements are considered and negotiated after trade has begun or eager discussions have already taken place – sometimes months past.

And when you find yourself in this situation, it may occur to you after-the-fact that you should have signed an agreement in the beginning.

Whoops! What’s an entrepreneur to do?

Thankfully, most jurisdictions allow for contracts, including NDA’s, to be signed with a retroactive date. This is commonly referred to as “backdating.”

But backdating (or adding a retroactive date) any contract can be tricky business, perhaps even more so with NDA agreements because of their nature and content.

Remember: the purpose of a Non-Disclosure Agreement (NDA) is to protect against the disclosure of your private and proprietary information.

Thanks to the limitations of science, we can’t go back in time and undo a leak of trade secrets or confidential information. We can’t prevent something that’s already happened.

There are ways, however, to ensure that past disclosures remain confidential and then preserve that confidentiality moving forward.

Like I said, though, this is tricky business. So let’s walk through how this would work.

First, be aware that asking a party to sign a NDA with a retroactive date is considered “bush league” to some in the legal world and may not be taken lightly by the party on the other end.

While adding a retroactive date to a legal agreement is not uncommon, you need to make sure you don’t come out of left field with a retroactive NDA in your hand after weeks of cooperative negotiations, conversations or partnerships. The situation should be approached professionally and there will need to be something in it for the other party.

In other words, if you suddenly realize that you once disclosed a vague design to a potential partner that’s now transformed into a full-blown money making system, you can’t just ask that one-time potential partner to keep it confidential now without any incentive for them.

Consider your situation and put yourself in the other parties shoes, lest you be struck down or laughed out of the room. Remember, you already disclosed the information and the Recipient Party is under no contractual obligation to sign a non-disclosure agreement at this point.

That said, there are appropriate times to backdate this kind of confidentiality agreement and many will agree that it’s not unethical or unusual. If done properly, an agreement with a retroactive date can have tremendous benefits for everybody involved.

Let’s say, for example, that you were discussing your technology with prospective investors prior to the technology actually being developed. (That is, after all, WHY you needed the investor!)

Now you’re ready to move forward with one of the investors and you’re wondering if you should have the agreement signed. That’s a complex question which won’t be answered in full here, but for the purposes of our topic, this would be a reasonable time to draft an agreement with a retroactive date in order to include the disclosures that took place prior to the investment being finalized. This would protect both you and the investor.

Keep in mind that backdating in the U.S. is discussed more liberally than in other parts of the world. The U.K. and other commonwealth nations generally have very little to say on the matter, indicating that this isn’t quite as common.

A Google search on backdating or retroactive date in legal contracts in the U.S., however, will offer a horde of results proving that business owners and courts, alike, have considered the topic in detail and rulings on the matter continue to shape their use and handling.

The takeaway, here, is to be sure and check the laws in your jurisdiction as well as common practice. Worst case scenario, it won’t be enforced by the courts. But even if it’s technically legally, it might be seriously frowned upon so you may want to consider other options.

Pitfalls of agreements with retroactive dates

There are a number of things that can go wrong when signing a non-disclosure agreement with a retroactive date. We’ll go over a few of the biggies here.

One possible snag in signing a backdated agreement is the potential for a breach upon signing.

When drafting the backdated non-disclosure agreements, be very careful to ensure that none of the obligations would be impossible to meet or perform after the signing of the agreement.

Make sure that your language is clear in stating that any such obligations are only applicable after the date of execution, rather than the effective date.

Another tricky situation with backdated non-disclosure agreements is the possibility that the Recipient Party of your confidential information failed to inform its representatives or third parties of their confidential duties prior to signing the agreement.

In other words, before the agreement with the retroactive date is signed, there’s no contractual obligation for the Recipient Party to maintain confidentiality.

Even if they intended to be cautious and fair with your information, they may not have handled it like truly “confidential” information because they weren’t yet under a contractual obligation to do so.

When drafting the agreement, be sure to have candid conversations with the other party about what may have already been disclosed prior to the agreement being signed. This way the language of the non-disclosure agreement can be very specific.

Otherwise, the Recipient Party isn’t likely to sign the agreement at all, recognizing that they may be in breach the moment they put their John Hancock on it.

It goes without saying that no contract should ever be signed with the intention of fraud or misconduct.

Before signing a retroactive agreement, consider all of the surrounding circumstances and draft your language accordingly. Make it clear as to why the backdating was necessary and steer clear of anything that may later be construed as fraudulent.

While there are a number of other issues that can arise from an agreement with a retroactive date, these are some of the most common because they’re often overlooked during drafting.

So far we’ve learned that there’s a time and a place to backdate a non-disclosure agreement and there are some serious pitfalls to avoid.

So, what are best practices when an agreement with a retroactive date is truly your best option? One of the most straightforward ways to backdate the agreement is to not backdate it at all.

If you’ve already disclosed proprietary or confidential information but you’re ready to confidently move forward with the other party and all necessary conversations have taken place, one option is to draft the non-disclosure agreement with an identical effective and execution date, as is usual, but include a clause that covers past disclosures.

An example of this kind of clause from Docracy:

This may not always be your best option, but if you’re fairly certain that your past disclosures have been in good hands and there’s no other reason to backdate the entire agreement, then this clause may cover all your bases.

Not only does it protect you moving forward, but it requires that the Recipient Party essentially promise that no confidential information previously discussed has been disclosed or leaked in such a way that it would have violated the terms of the agreement, had the agreement been in effect already.

Another option is to draft your non-disclosure agreement as usual, but include an “Effectiveness of Agreement” clause. Basically this language specifies that the effective date controls the agreement as opposed to the date of signature.

If you opt for this route, don’t forget to include language that excludes any obligations that would be impossible to meet retroactively, otherwise you run the risk of breach upon signing, like we discussed earlier.

The “Effective Date” clause seems simple enough, but you must be cautious not to just plop it in your agreement. Read the non-disclosure agreement in its entirety and consider what logically can’t be applied to the retroactive effective date.

A third and final option is the “Warranties & Representation” clause. This can be approached in one of two ways.

Either the clause can require the Recipient Party to attest that no disclosures have been made of confidential information already shared. Or, if certain confidential details have already been disclosed by the Recipient Party, those can be specifically listed in this clause, with a warranty that no other disclosures have been made, other than those specifically listed.

Language such as this can be used, followed by the details specific to your arrangement.

In the end, backdating your non-disclosure/confidentiality agreements is no easy task and should not be taken lightly. They’re a complex web of legalities and language that can go very, very wrong in the blink of an eye.

Some jurisdictions don’t allow adding a retroactive date, while others frown upon them, and yet others are eager to find ways to make them more functional.

Prior to drafting or signing a retroactive agreement, do your research, choose your words wisely, and approach with caution. Done correctly, they can be quite useful. Executed poorly, however, and you could find yourself in a world of hurt.

Credits: Icon past by Scott Lewis from the Noun Project.