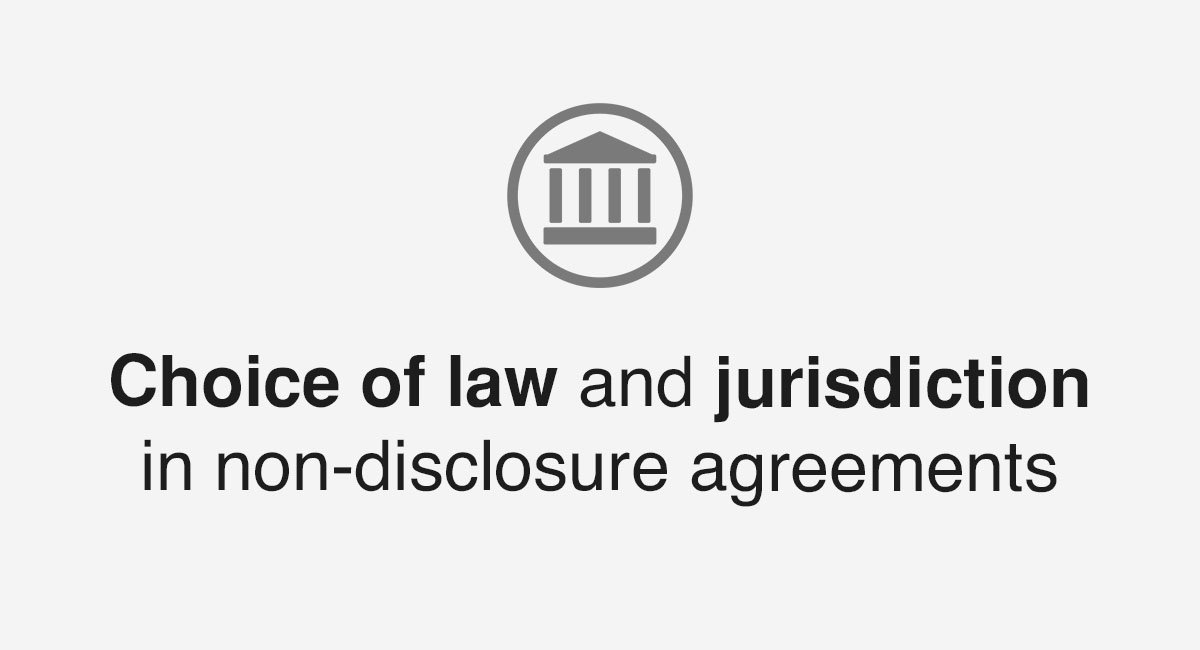 You may already be aware that choosing a jurisdiction for your non-disclosure agreement (NDA) is extremely important.

What you may not be aware of is that there are actually two different parts to this: jurisdiction and choice of law.

Jurisdiction refers to a country’s or state’s court that will actually accept a lawsuit application (also known as forum selection).

Choice of law refers to the country’s or state’s law that will apply to the NDA (also known as governing law).

The jurisdiction and choice of law don’t have to match.

For example, if you’re based in Canada, you may want the jurisdiction to be in Canada but English law to apply. This means that you want any lawsuits by either party to be filed in a Canadian court and the Canadian court to apply English law when considering the lawsuit before them.

Here are some examples of such clauses.

A “Choice of Law” clause from Sonnyboo’s Non-Disclosure Agreement:

A “Choice of Law” and “Jurisdiction” clause from the Canadian Corporate Counsel Association’s Mutual Confidentiality and Non Disclosure Agreement:

Who decides these clauses?

In a one-way NDA (where the agreement exists for the benefit of mainly the one party who will be making disclosures), the jurisdiction and choice of law is normally determined by the disclosing party.

This is because the disclosing party is also normally the one who insists on the NDA agreement, pays for the drafting and creation of the agreement and gets first choice of venue.

It’s normally harder for the receiving party to come up with strong justifications to change the venue after it has been chosen by the disclosing party.

However, in a mutual NDA (where both parties are making disclosures and require confidentiality from the other party), then it normally comes down to who has the biggest bargaining power.

If one party needs the business relationship more than the other party (for example, a party is asking for investment from another entity), then the party with the least to lose gets the upper hand in such discussions.

Alternatively, from a practical perspective, the larger entity with a more experienced legal team often gets the final say.

Which choice of law or jurisdiction?

There are generally 3 main factors for you to consider when deciding which jurisdiction or choice of law you wish to apply to your NDA.

Some favor perpetual NDAs whilst others are strongly against them. Some provide a wider range of suitable legal remedies in event of a breach.

Knowing which side of the fence you are likely to be on and what kind of agreement you’ll want to have will help you to consider which judicial system will be efficient and more favorable towards the results that you seek.

For example, in Everett J. Prescott, Inc. v. Ross, the court stated that it generally does not favor non-competition clauses that would limit a person’s future employability.

In a similar vein, a Kansas court in Augusta Medical Complex, Inc. v. Blue Cross of Kansas, Inc., did not like contracts with indefinite time durations.

States like California are well-known for favoring employee creators over their employers whilst states like Delaware and New York are more supportive of copyright and publishing rights.

Since NDAs tend to deal with highly specialized copyright and intellectual property matters, it’s important to consider whether a particular court or choice of law possesses the subject matter jurisdiction and experience necessary to rule over such a matter.

Some courts may consider themselves inadequate to determine the subject matter at hand and decline jurisdiction.

For example, in the US, patent infringements fall within the exclusive jurisdiction of the federal courts and not state law.

Another huge factor to consider is convenience.

If you were based in the UK, but the NDA was under American jurisdiction, you may find it a huge inconvenience and costly exercise if you subsequently had to take an international flight to attend legal proceedings.

Besides your own travel and time spent on the court proceedings, you’ll also have to consider having to fly your witnesses over as well.

For this reason, some parties prefer that the jurisdiction be based where they themselves are located or where their headquarters are.

Having the rule of law in your favor is one thing, being able to enforce it and the ease with which you can do it, is another.

Although most courts recognize the validity of foreign legal judgments, great distances and foreign legal procedures tend to make enforcement much more complicated.

For example, if the court order was given by an English court but enforcement had to be done in Libya, you may encounter more difficulties than usual getting the order enforced, compared to an order given by a local court.

In general, the courts will seek to uphold any express provision in an NDA for choice of law or jurisdiction.

For example, where the contract provided for all suits to be filed in the Ohio Court, the U.S. District Court for the District of Oregon felt compelled to transfer the suit in Sheasly v Orr Felt Company. In this case, the plaintiff was a citizen of Oregon whilst the defendant was an Ohio corporation.

Although it’s not mandatory for your NDA to have a choice of law or jurisdiction clause, it’s advisable to do so as in the event of a dispute and uncertainty, you may be looking at expensive and drawn out proceedings in order to unravel any conflict of laws and determine the jurisdiction or choice of law that will apply.

Even worse, the court that ends up having to determine the issue of jurisdiction and choice of law is normally the court that has been chosen by the quickest party to file a legal application.

Whether the chosen venue makes sense or not, you could end up wasting money and time having to argue for a different jurisdiction and choice of law.

In the absence of an express provision, the courts will look for a relationship or connection between the parties and the agreement to help determine the jurisdiction and choice of law that will apply.

Even though courts normally look at where the parties are based as a starting point, other factors that will influence the outcome include where the parties headquarters are, where the contract was being performed, what geographic location the agreement was meant to apply to, applicable international law etc.

Because of this, most parties make it a point to expressly state their choice of law and jurisdiction in the NDA they’ll be signing.

However, not all courts feel bound to follow the parties express wishes especially if the venue bears no relationship at all to the parties or cause of action and there seems no reasonable basis for the choice in question.

For example, California law prohibits anti-competition clauses and it will uphold this prohibition even if the NDA specifies another state as the governing jurisdiction as long as the state chosen in the agreement has no real relationship to any of the parties or agreement.

If the other party resides in the EU, Article 25 of the Brussels regulation requires that there’s consensus reached on the jurisdiction.

This means that if you feel that there is the possibility of conflict later on regarding jurisdiction, you should make it a point to bring the jurisdiction issue to the notice of the other party and note evidence of their express consent to your choice.

When courts decline choice of law or jurisdiction

For example, the Supreme Court of Florida has declined jurisdiction where the parties and the matter at hand bears no relationship to Florida in McRae v. JD/MD, Inc.

In contrast, New York and Delaware courts have ruled that they have jurisdiction even where the agreement’s choice of jurisdiction was the only relationship to the state.

See for example U.S. Bank Nat’l Ass’n v. Ables & Hall Builders where neither party resided in New York and none of the events giving rise to the action was related to New York.

Besides expressing the parties’ choice of law and jurisdiction, the NDA can also further add whether these are to be exclusive or non-exclusive.

A non-exclusive jurisdiction clause means that in the event of a dispute, either party could file in a separate court other than the one stated in the agreement.

This is useful for parties who believe that they may want to bring several different proceedings in different countries or states.

For example, a party may want to bring an NDA lawsuit in Delaware but prefer Californian jurisdiction for an employment lawsuit where the court may be more favorable to his or her plight.

A court that’s not expressly named in the NDA would have to consider whether it has jurisdiction over the matter by examining if it had any connection to the parties or the agreement in question.

However, beware that certain courts like the Indian Supreme Court in Swastik Gases Private Limited v. Indian Oil Corporation Limited have ruled that if the parties specifically named a jurisdiction in their agreement, the court did not require the words “exclusive” and “only” to find that other jurisdictions are ousted.

Below is an exclusive jurisdiction clause from Microsoft in its Confidentiality Agreement for Licensing Discussions:

Here’s an example of a non-exclusive jurisdiction clause from the Intellectual Property Office’s brochure on Non-Disclosure Agreements taken from the University of Glasgow’s website:

It’s also possible to draft the jurisdiction or choice of law clause in such a way that there are two exclusive jurisdictions in the same NDA.

As you can see, choosing a jurisdiction and choice of law is not a straightforward task. There are multiple complex issues to consider, including what conflict of laws may apply and whether a certain country and state may be favorable to your outcome or not.

A mistake can lead to added legal costs and worse still, an undesirable result.