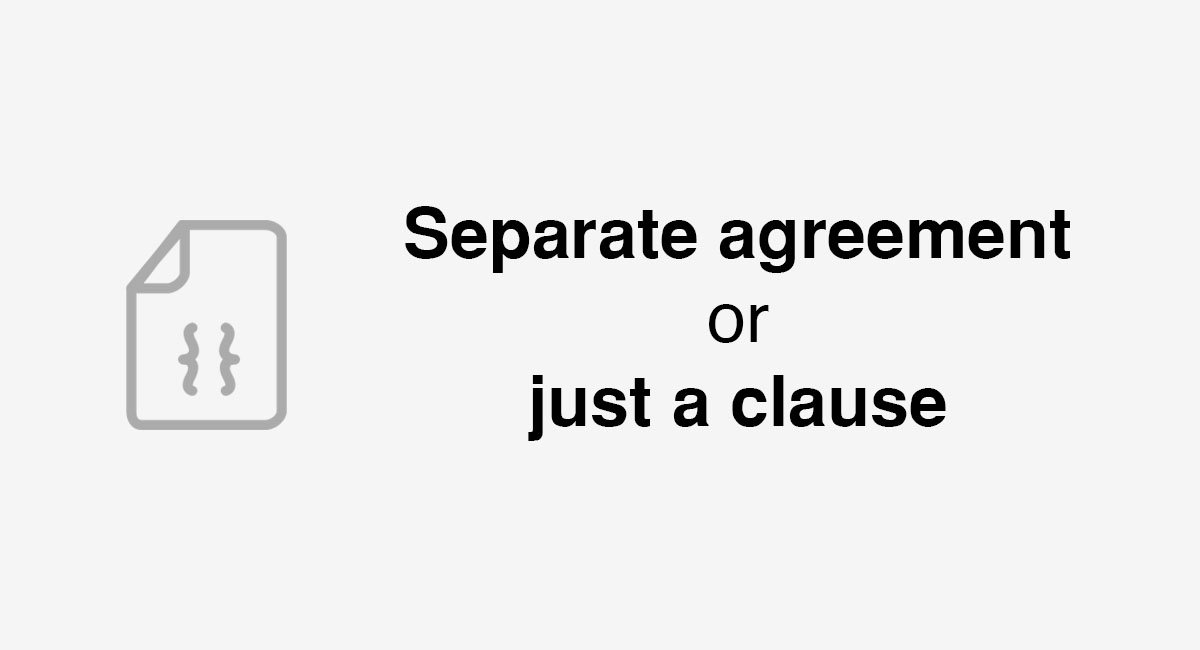 The ability to legally obligate other parties who are working in or in a partnership with your business to protect confidential information is very useful if you’re an entrepreneur, business owner or CEO with intellectual property or other proprietary information.

A non-disclosure agreement (NDA), also known by other names such as a trade secret agreement, confidentiality agreement or non-use agreement is a legal contract that requires parties to keep disclosed information confidential.

This obligation to keep confidentiality normally extends beyond the official end of the contractual relationship between the parties.

NDA agreement are commonly used between parties who are considering a potential working relationship with each other such as a partnership, an independent contractor relationship, a distribution license, commercial joint ventures, mergers and acquisitions and also in staff hiring situations.

There are generally two types of this kind of agreement:

There are advantages and disadvantages to doing this and we will examine some of these now.

One of the main advantages of combining a non-disclosure clause into another agreement such as an employment, non-competition and non-solicitation agreement is convenience.
Instead of having to draft two separate agreements, you can do it all in one.

The parties only have to sign one large document rather than several.

Here’s an excerpt from Coca Cola’s Agreement on Confidentiality, Non-Competition and Non Solicitation: 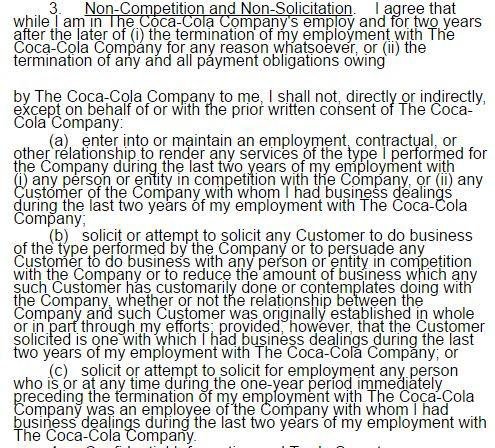 Very often, a party may wish to achieve several objectives with a particular project and combining different clauses in one single agreement can help to streamline everything.

After all, the scope of the agreement might be the same for all objectives. Keeping all the clauses in one agreement also makes things easier to track.

For example, by including non-disclosure requirements into an employee’s contract when you’re first hiring him or her, you’re expressly notifying that person up front of the importance of keeping confidentiality and the duty not to disclose sensitive information in his or her job.

It may be easier to manage negotiations and save time if the parties only had to negotiate the terms of one single agreement rather than several different agreements.

Because everything is more streamlined and there’s only one document to create and negotiate, legal costs will probably be lower as well for both parties.

Sometimes the different clauses may conflict with one another.

For example, a non-disclosure clause’s main purpose is to prevent disclosure of confidential information.

However, contrast this with a clause that assigns intellectual property rights to another party that can be found in merger and acquisition agreements.

Having such conflicting clauses in the same agreement may confuse the objectives of the agreement.

As an example, consider the case of Silicon Image, Inc. v. Analogk Semiconductor, Inc. where Silicon Image erroneously included a time limitation for the protection of trade secrets. It subsequently was unable to enforce confidentiality after the time period ran out.

However, an indefinite time duration is generally not suitable for other types of clauses, especially if they are seen as restricting commercial freedom such as non-competition and non-solicitation clauses.

Certain courts frown particularly on clauses that are seen to be restrictive on competition.

In a similar tone, the District Court of Maine held that it does not favor non-competition clauses that would limit a person’s future job prospects in Everett J. Prescott, Inc. v. Ross.

Applying an indefinite or long time duration for non-competition and non-solicitation clauses normally will result in courts striking down the entire agreement.

Some countries and states like California is also well-known for being more supportive of employee creators rather than their employers when it comes to intellectual property issues.

Contrast this with the states of Delaware and New York that have more established bodies of law in relation to copyright and publishing rights in favor of employers.

As a general rule, if you intend to request employees to sign confidentiality agreements midway through their employment, this should be done during a raise, bonus or promotion as part of fair consideration.

In Latona v. Aetna U.S. Healthcare, Inc., the employer asked its employees to sign a non-competition and confidentiality agreement.

One employee refused and the employer fired her. The court ruled that the employer’s actions were an unlawful restraint of trade in contravention of California’s public policies.

If you combine different types of clauses into one single agreement and your agreement was declared invalid, you lose the benefit and protection of all clauses.

That is a severe price to pay and a huge risk to undertake.

If your agreement had the likelihood of being adjudicated by a governing law or jurisdiction that might declare certain clauses invalid, you would be wise to separate those risky clauses into a separate agreement.

Apart from a contract being declared invalid due to a court ruling, there’s also the risk that by combining clauses into one agreement, any breach due to wrongful actions on your side might threaten the whole agreement.

For example, let’s say that one of your own employees treats confidential information carelessly and it gets published in the public domain.

Disadvantage #4: Not getting the full benefits of a NDA agreement

Another important point to consider is that NDA agreement normally have specific kinds of clauses that may not be able to be suitably fleshed out if combined in another type of agreement.

Some common beneficial NDA clauses that may be sacrificed if combined with another type of agreement are:

See for example the case of Global Telesystems, Inc. v. KPNQwest, N.V in the Southern District of New York where the court upheld the non-solicitation provision in a NDA agreement.

When you combine several objectives into one agreement, you’ll be forced to have one jurisdiction and one governing law rule over the entire agreement which may end up in conflicting results for what you’re trying to achieve.

Some agreements work better with non-disclosure clauses whilst others can present a conflict.

In summary, when considering whether you should combine non-disclosure clauses into other types of agreements, use the checklist below to help you think about some questions that you should be asking yourself:

Credits: Icon brackets by Vandana agrawal from the Noun Project.