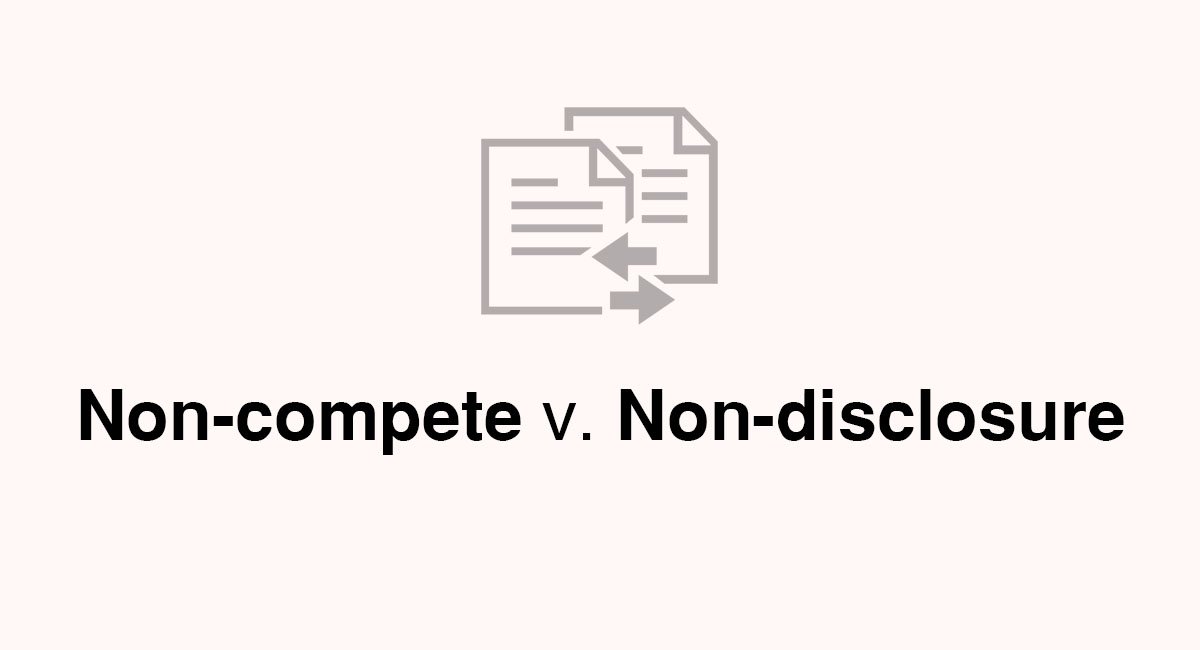 While there are cases where this is true, legally speaking, these 2 legal agreements are very distinctive agreements, serving two different purposes, and one doesn’t necessarily have to be attached to the other.

Each of these two agreements protects business owners from a specific type of harm,[‘];;;;;;;;;;;;;;;p and using the wrong agreement can leave your business vulnerable to damage.

It’s important as a business owner that you understand the difference between the two agreements.

Non-compete vs. Non-disclosure from EveryNDA

A non-compete agreement, or covenant not-to-compete, is typically a one-way agreement in which one party (the Recipient) agrees not to compete against the other (the Disclosing Party):

Due to their nature, non-compete are rarely an isolated contract. They’re often found attached to, or as a clause within another agreement, such as an employment contract or franchise agreement.

Most courts and jurisdictions will enforce a non-compete agreement provided that the Disclosing Party of the agreement has a reasonably competitive business interest and rational restrictions.

If you’re operating from California or Texas, be sure to review the rules in those states, as their laws and applications on these type of legal agreements are different.

From Maryland Law Blogger, this is a good example of a typical non-compete clause within a “Contract for Employment” agreement:

Essentially, the restrictions in this type of agreement have to be such that they protect the interests of the business or employer without limiting the ability to of employees to support him/herself in the future.

For example, a business that makes and sales a unique type of patented software has a judicious reason for restraining current and former employees from competing, but could not restrict its former employees from working for another computer or software company ever again. That kind of scope would be far too broad and unrealistic.

Along those same lines, that same employer probably wouldn’t get away with restricting former employees from launching their own software company for 10 years after their employment ends or maintaining their headquarters within a 1,000 mile radius. Again, this type of scope is far too broad and unrealistic for the employee’s well-being.

Despite the wide variety of names, the function of a non-disclosure agreement is rather narrow. This type of legal agreement simply limits or restricts an independent contractor, employee, business partner or potential affiliate from disclosing confidential information such as trade secrets, documents etc.

Similar to the non-compete, the non-disclosure agreement can often be found as a clause within a larger agreement, such as an employment contract. Or, they may be a completely separate contract as part of a much larger arrangement, such as when two companies agree to discuss the possibility of a merger and numerous contracts are signed all at once.

The main advantage of using a non-disclosure agreement is its ability to protect a company’s trade secrets, financial information, marketing plans, clientele lists, and other private information not generally made available to the public, but which is unavoidably disclosed to the other party as a necessary part of doing business.

Differences between non-compete and non-disclosure

The most critical difference between these two types of agreements is their function.

One protects a business from unfair competition while the other protects its trade secrets and confidential information. Both are designed to protect business interests, but cover two distinct topics of importance.

Scope is another source of difference between these agreements.

The non-compete agreements, if you recall, are only enforceable if their scope is limited. Unrealistic geographic and time-restrictions within this type of agreement are grounds for rejection by the courts.

Another distinct difference is in the fact that non-competes are generally a one-way contract, while non-disclosures, on the other hand, can often be mutual.

For example, when two companies form a joint venture to work on a specific project, both are likely to be disclosing private and confidential information to the other, so a non-disclosure agreement will specify what information, from each party, is to remain confidential.

In other words, both parties are putting something on the line so the agreement will be designed to protect them both. This is called a mutual non-disclosure or a bilateral non-disclosure. This isn’t always the case with this type of agreement, but often is.

Both of these 2 agreements have their benefits and are appropriate at certain times.

Are they ever one-in-the-same?

This is a question that’s of much debate within the legal community and there’s really no black-and-white answer, so I won’t attempt to give you one. I will, however, cover the basics of what we know today.

First, it’s not uncommon for a non-compete and a non-disclosure clause to be found within the same contract.

From youra.com, this is a typical example of a joint agreement that includes both. This is the introductory clause of the agreement:

Another similar example reads as such:

In both instances, the parties are joining these 2 type of legal agreements as a way to, essentially, cover all of their bases. But, this is where the legal debate comes in.

Some in the legal community argue that having both clauses in an agreement is unnecessary, and sometimes even inappropriate.

The argument, essentially, is that having a non-disclosure clause or agreement will sufficiently protect a business and its interests, therefore including a non-compete is redundant and excessive.

That said, having both clauses or agreements rarely negates the contract or agreement altogether, it simply renders one of them unnecessary.

On the other hand, there’s a recent court case in Michigan (Michigan One Funding,LLC v. Maclean) whereupon an employer attempted to prevent a former employee from going to work for a competitor not based on a non-compete agreement, but rather based on a non-disclosure agreement.

The employer’s argument was that the only way to enforce the non-disclosure agreement was to prevent the former employee from working with one of its direct competitors.

The former employee argued that it could take the position with the competitor while still honoring the non-disclosure clauses and requirements by not disclosing any trade secrets to his new employer.

In the end, the employee was allowed to take the new position with the understanding that the non-disclosure that was signed would be enforced.

That said, many attorneys will argue that it’s best, in many circumstances, to include both as part of certain contracts or packages, such as employment agreements.

As each protects from a distinct type of harm, it may result in nominal overlap, but will chiefly work to prevent any gaps in protection.

These agreements occasionally related, but have some very clear differences, both in scope and in function.

If you merge the two, such as in our examples above, be clear in your purpose, fair in your scope and explicit in how the contract is expected to be enforced in order for it stand up to scrutiny in court.

Credits: Icon Compare by Mariana from the Noun Project.