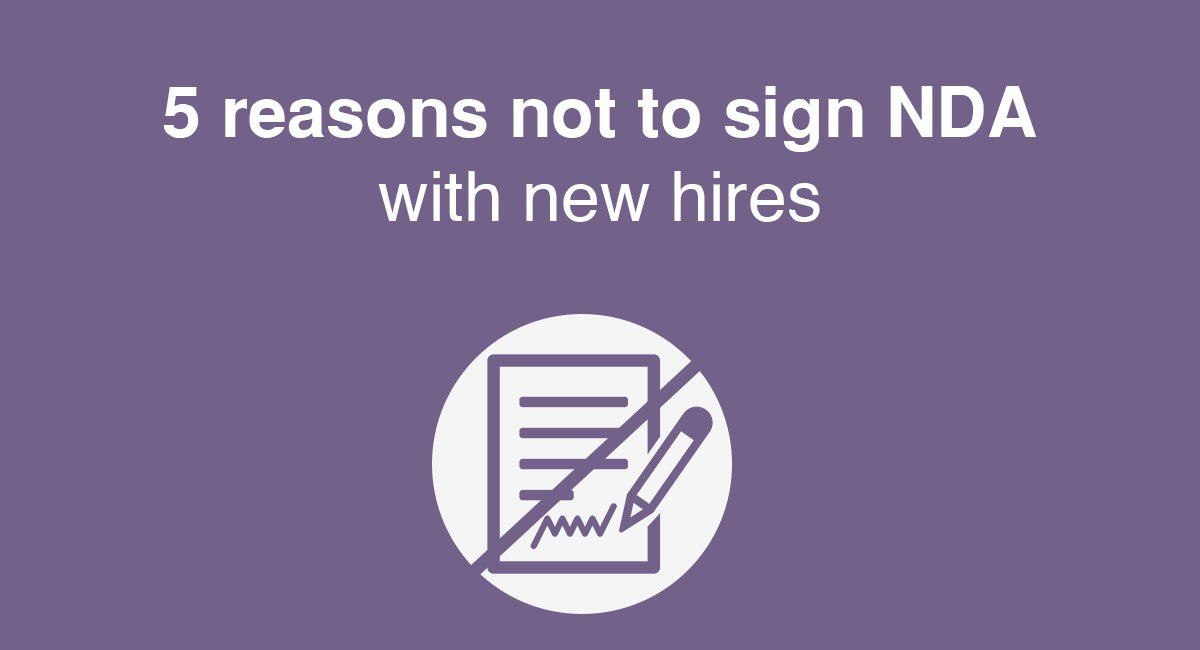 One of the easiest legal tools to use when it comes to protecting intellectual property and confidential information is the non-disclosure agreement (NDA).

It’s faster and cheaper than a patent and it doesn’t require any registration to be legally valid.

Potential job applicants are almost required to sign the agreement when they get hired. Some companies even require the agreements to be signed before interviews commence.

Although it’s a wise move to have the agreement ready, there are several factors that you should consider in deciding whether you should always require this kind of agreement for new hires.

5 Reasons Not to Sign NDA with New Hires from EveryNDA

Here are 5 reasons why you may not want new hires to sign your NDA.

1. Your NDA may signal distrust

Relationships need to be built on trust. Starting off with a legal contract that is based on distrust may not be a good way to begin an employment relationship.

Trust is the lubrication that makes it possible for organizations to work.

An employee might view the NDA as a sign that you do not believe in their integrity.

The agreement may also signal that you are a particularly litigious employer and this doesn’t normally inspire loyalty.

However, this is less of a problem where these legal agreements have become the norm and is expected anyway, especially in places like Silicon Valley.

2. Your NDA may destroy opportunities to secure talent

The NDA may also put off talented potential employees.

Some especially ambitious job applicants do indeed have an intention to create their own business in the future and don’t want to be saddled with the possibility of being sued for doing so, even if they haven’t stolen or used their employer’s confidential information.

Competing for tech talent never gets easier, nor is it a perfect mathematical equation,” Carroll says. “Instead it’s about understanding your market, knowing what your current and prospective employees are looking for, and doing your best to create the environment that attracts the right workers to your company.

Others realize that they may have to change employers at some point and the NDA they signed might hinder them from being able to seek employment within the same industry if they ever wanted to leave.

As an example, skilled and experienced developers are often aware of how similar ideas are and that they are built upon other existing ideas.

Because of this, they are keenly aware that an NDA has the potential to limit their own ability to move and work freely within the industry without fear of being sued.

This is especially so if the agreement also has anti-competition clauses that prevent them from working for a competitor.

You’ll probably have different levels of employees holding differing levels of responsibility within your business.

If you don’t have trust inside your company, then you can’t transfer it to your customers.

Will all your employees really need to sign your NDA? Will they all have access to confidential information?

If you have secure storage and information security policies and procedures in place (which you should have) then these types of employees shouldn’t be allowed or able to view confidential information.

Depending on the role, you may not need every employee to sign your agreement.

4. Your NDA has not been updated

Although having an NDA can bring many benefits, this may not be the case if you haven’t yet had the time to update your NDA and it is full of irrelevant, outdated or even illegal terms.

If your agreement was originally created for use in Delaware but you then later opened a new office in California, you’ll probably need to update the agreement for use in California. Otherwise, your NDA may carry illegal terms that invalidate the entire contract.

The DTSA provides added protection for trade secrets by providing employers with the opportunity to apply for “ex parte” seizure orders.

In addition, you can also apply for exemplary damages which can amount up to 2 times the amount of monetary damages if there’s evidence of willful and malicious intent by the employee in the misappropriation of your trade secrets.

However, if you wish to take advantage of these powers, you need to ensure that your NDA carries the required whistle-blower immunity provision as detailed in 18 USC § 1833(b).

In this provision, employees need to be informed that they will be protected under civil and criminal law if they make disclosures to a Federal, State, local government official or attorney about suspected legal violations of law.

5. You lack the resources to enforce your NDA

Court cases are almost never cheap and never quick. Instead of throwing your finances into pursuing litigation against an errant ex-employee, you may find it more useful to leverage your finances for other more profitable activities.

If you think that you’re unlikely to be able to invest the kind of resources required for enforcing all your NDA, establish better security policies and procedures in your business rather than relying on just the NDA to protect your confidential information.

The agreement itself is not enough. You must protect your confidential information.

In any case, your employees have an implied duty of confidentiality to you as the employer, with or without an NDA.