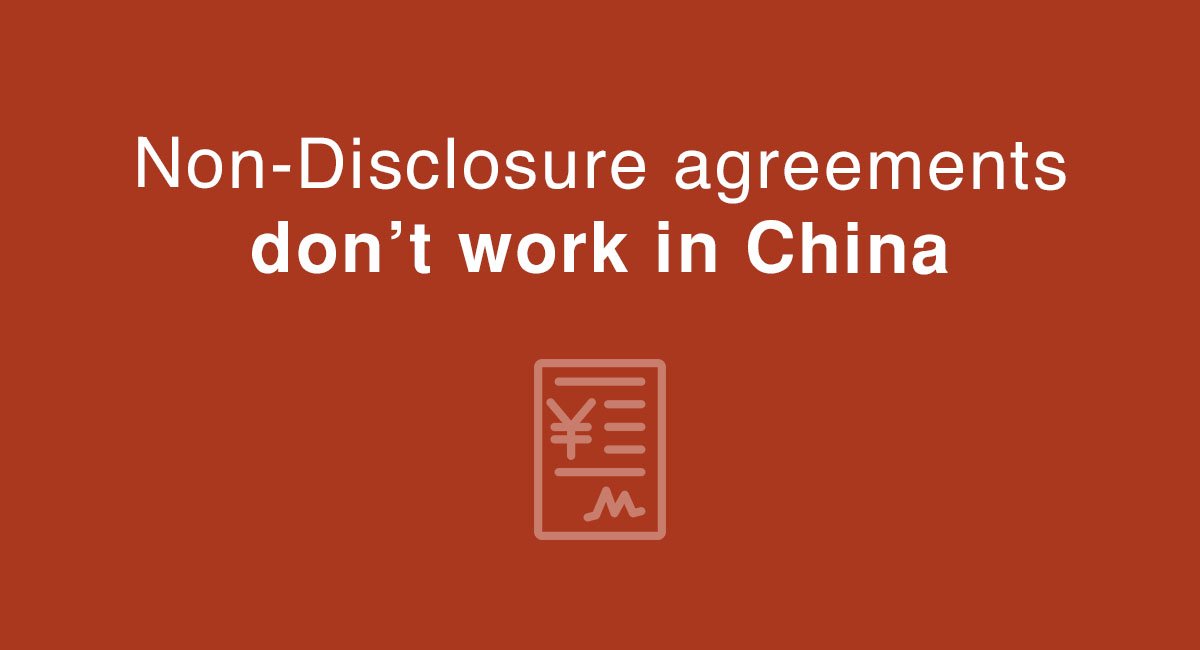 If you’re like many other American businesses that sell physical products, whether online or in a brick and mortar store, you may have considered getting your products manufactured in China because of the exceptional cost savings.

While there are lots of advantages about getting your products manufactured in China, there are also pits for the unwary that could cost you and your business dearly.

One common but understandable mistake that many entrepreneurs make is to apply their understanding of the law from an American/Western perspective to Chinese law.

What entrepreneurs need to realize is that the Chinese legal system is its own beast and you cannot assume that certain standard procedures that apply in Western law will apply equally in China.

One such example is the use of non-disclosure agreements (NDAs) in China, also known as confidentiality agreements. NDAs are a common legal tool that business owners, CEOs and entrepreneurs use to protect their proprietary and confidential information.

When dealing with Chinese manufacturers, a lot of American companies use a NDA to protect their confidential information while they research, obtain quotes and investigate the possibility of getting a Chinese manufacturer to produce their products for them.

Although these agreements can be highly effective when created and enforced correctly, it is almost pointless to have a Western-style NDA in China. Why is this?

One of the biggest problems that business owners face when getting quotes or outsourcing their manufacturing to China is the risk of their intellectual property and idea being stolen by their Chinese manufacturer.

Not only is this a genuine threat, but aggressive Chinese manufacturers have been known to compete with their clients by approaching the client’s customers directly and offering the same product but at a lower price. Even if the Chinese factory does not poach your current customers, they may decide to sell your products in a market that you’re intending to expand to, thus halting or limiting the growth of your business.

A Western-style NDA normally requires that the party that is receiving confidential information (“Receiving Party”) to maintain confidentiality of the secrets that they receive.

However, because an unscrupulous Chinese manufacturer will most likely intend to use your intellectual property for their own purposes and profit, they will have no interest in exposing your information to the public or other competitors.

Because of this, many American companies insist on Western-style legal protections to protect their intellectual property, not realizing that the legal protections that they insist on may not only be ineffective but actually hinder them from getting proper legal recourse in Chinese courts.

Use NNN in China

Instead of drafting a pure NDA agreement, American companies should be opting for a Non-Disclosure, Non-Use and Non-Circumvention agreement (NNN) that includes the normal protections of a NDA including non-disclosure and non-use provisions but in addition to those, also non-circumvention protection.

Circumvention basically refers to the deceptive act of trying to outwit or bypass the middle party in a transaction (in this case, you) to move directly to the buyers.

Non-circumvention prevents a Chinese manufacturer from undercutting your business or taking advantage of the confidential information that you have shared with them or to go direct to your customers.

Clauses for a NNN agreement

Here are some clauses that you should seriously consider having in your NNN agreement if you intend to investigate the possibility of manufacturing in China:

Just like a NDA agreement, a NNN agreement should expressly state how long the Receiving Party is going to be bound by the agreement.

The duration for non-disclosure, non-use and non-circumvention could extend beyond the termination of the actual contractual relationship.

Here is an example of a duration clause in this kind of legal agreement taken from Docracy:

Try as much as you can to list down all documents that you would consider confidential as this creates awareness.

Here is an example of a definition of confidential information taken from LawMart.com:

Although not completely necessary, if you intend to provide a list of important contacts such as clients, marketers, investors and agents to the Chinese manufacturer, you should include a clause that lists all these contacts as exclusive and valuable to you and your business and the Chinese manufacturer is barred from contacting them without your permission. You don’t have to include a clause listing who your valuable contacts are if you don’t intend to share them though.

A non-disclosure provision will legally bind the Chinese manufacturer to protect your confidential information and not disclose it.

You may also wish to add that the parties to the agreement are not allowed to share the information with other employees, sister companies, subcontractors or third parties unnecessarily.

In cases where confidential information is wrongly misappropriated and misused for profit, the manufacturing company may not themselves do the dirty deed directly but they may “accidentally leak” the information to an unauthorized third party.

To prevent this, you may wish to make the Chinese manufacturer responsible for the behaviour of any of their agents as well as liable for any “leaks” that may occur to unauthorized third parties.

Here’s an example of a clause taken from Docracy again: 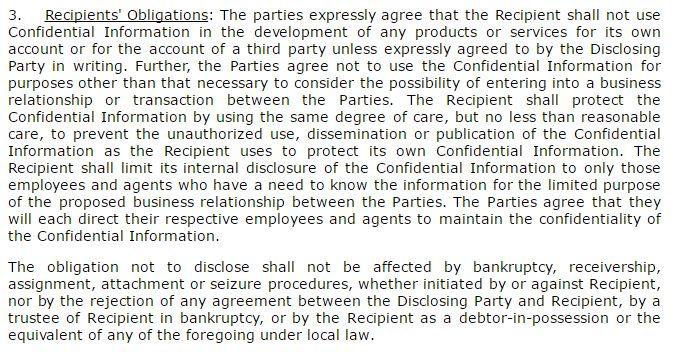 You can include a non-competition clause expressly stating that the Chinese manufacturer is barred from using any of the confidential information that you have provided or misuse any advantages that they may have acquired in the course of your manufacturing relationship to compete with you.

As mentioned earlier, a non-circumvention provision is especially important when it comes to dealing with Chinese manufacturers as most of the problems that have occurred relate to manufacturers using confidential information to create their own products and then, to sell to your clients directly.

Similar to the non-circumvention clause but this time in relation to your staff, the non-solicitation clause prevents the Chinese manufacturer from poaching any of your employees.

A major problem with insisting on using American law and jurisdiction is that in the event of a breach, even if you were to prevail in the American court, you won’t be able to enforce your judgement in China.

This is because there is no treaty between China and the US regarding the enforcement of judgements. Even if a Chinese court were to accept consideration of the merits of the case before it, it would do it from its own view according to Chinese law and not to American law.

If you intend to do business with a Chinese manufacturer, you should get the NNN’s jurisdiction and governing law to be based in China so that you have legal recourse in China itself against the manufacturer in the event of a breach.

Another huge difference between a Western-style NDA and a NNN is that in most NDAs, injunctive relief is normally the preferred legal remedy.

However, if your NNN’s jurisdiction and/or governing law was not based in China, you would be wasting valuable time trying to get your judgement enforced in China against the Chinese manufacturer.

In the meantime while you’re struggling to get a Chinese court to enforce your American judgement, the Chinese manufacturer may put you out of business by poaching all of your customers.

When deciding what amount to put in your NNN agreement, bear in mind that these damages are normally more of a realistic assessment of what damages you would incur if the Chinese manufacturer did indeed breach the NNN agreement, rather than a real penalty.

In fact, what most Chinese manufacturers fear most is a pre-judgement from a local Chinese court that will seize their assets in order to determine the case before them. Usually, just the knowledge that this threat is a possibility because of an effective NNN is enough to motivate the Chinese manufacturer to tow the line.

Although tempting, you may wish to avoid an amount that is unreasonable because Chinese manufacturers have been known to reject unreasonable amounts and refuse to do business further.

An unreasonable amount of damages may cause the Chinese manufacturer to think that you are a newbie in China and possibly going to be difficult to deal with and reconsider whether they wish to establish a manufacturing relationship with you.

As you can see, there are many traps for the novice American company wanting to do business with a Chinese manufacturer for the first time.

Bear in mind that once you have a suitable NNN agreement in place and you’re able to successfully find a Chinese manufacturer that you feel comfortable working with, you’ll need to move next to a Manufacturing Agreement or OEM (Original Equipment Manufacturer) Agreement for the actual production itself which will have more detailed provisions in relation to the manufacturing process itself.

Credits: Icon yuan receipt by Rockicon from the Noun Project.