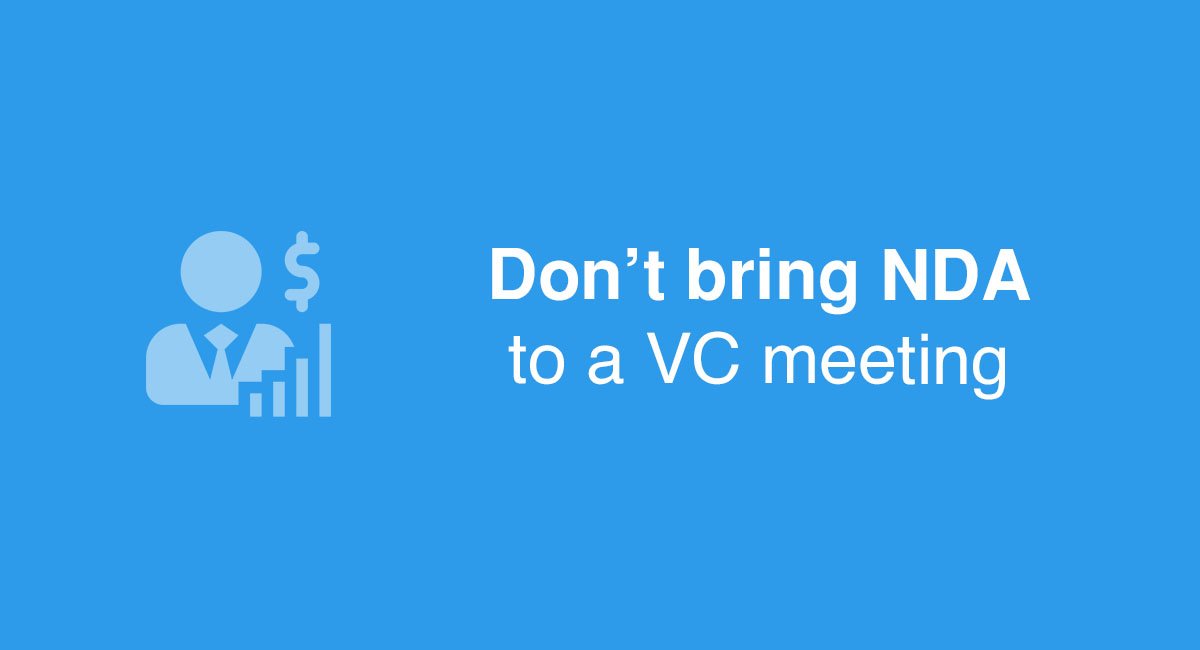 Asking a Venture Capitalist to sign a non-disclosure agreement essentially makes you the kamikaze pilot of the business world. It’s entrepreneurial suicide.

And this sentiment is pretty universal so there’s no point in trying to get around it.

No matter how special, unique, or innovative you think your project is, venture capitalists have heard it all and they’re not likely to break their “no NDA” rule just for you.

But, have no fear. It’s not because they’re trying to rip you off or steal your thunder. In fact, their goal is just the opposite.

Venture capital firms have valid reasons for refusing to sign your NDA so hear me out before you bail.

Anatomy of the NDA in 21st century business

Non-disclosure agreements (usually shortened as NDA), also known as Confidentiality Agreements, are a dime-a-dozen in 21st century business, but valid and necessary none-the-less.

While NDAs may not be the most stimulating or favorite of topics, these agreements are everywhere these days and newbie industrialists or startup founders are often quick to whip them out at VC meetings.

As a startup founder, this would actually be a bold and wise move in most any other business situation.

Hiring your first employees? By all means, have them sign an NDA as part of their Employee Agreement! Need a developer for your first mock-up? Absolutely! Bust out that agreement.

Engaging an accountant who needs specifics in order to create accurate financial projections? Well, this kind of agreement to protect such confidential information, probably, isn’t a bad idea.

Because NDAs are vital to business and more than reasonable in any number of business relationship situations.

These agreements protect your startup’s intellectual property, safeguard your trade secrets and shield the proprietary information that’s going to help launch your business to capitalist success.

The agreements won’t necessarily stop folks from leaking your secrets, but they can certainly help and they sure do make a great exhibit if the inconceivable leak happens and lands you in litigation.

Either way, NDAs are important.

And, if executed properly, they can go a long way towards protecting the nuts-and-bolts of your business, as well as make you look pretty legit.

So, if they’re so valid and important, why shouldn’t you ask a VC to sign one?

Don't bring an NDA to a VC Meeting from EveryNDA

It’s important to note here that VC’s are generally wealthy industrialists who have already done the grunt work of building an empire from the ground up. Sure, there are some trust fund babies out there, but, let’s be honest, keeping money can be hard work, too.

But, I digress. Let’s stay focused.

The point is that VC’s are solely interested in ‘investing.’

They have no desire to do any leg work and their sole aim is to give you the financial boost you need so that your great idea can move forward and make money. Then, when you make money, they make money.

So, we know that NDAs are vital to the success of a good business and the growth of a great idea. And we know that VC’s are veterans to the business game who have been around a block or two.

So, why on Earth wouldn’t they be willing to sign this agreement, a valid contract of which they surely understand?!

Well, first of all, they simply don’t have the time.

VC’s can see anywhere from a couple hundred to several thousand entrepreneurs and inventors each year. If they stopped to read, review, negotiate and sign an NDA for every single idea that crossed their path, their lives would be so entrenched in the legalities of the agreement that the actual act of engaging a business and investing in it would never come to pass.

If VC’s did sign an NDA for every idea that crossed their paths, think about the sheer volume of legal documents that would be to keep track of and organize. Every VC would need to hire an extra attorney just for the purpose of monitoring these agreements. Clearly, that makes no sense.

A third point to ponder is that of the hundreds or thousands of other ideas that your (potential) VC is reviewing, at least a handful of those are similar to yours.

As far as the VC’s are concerned, signing this kind of agreement would drive a wedge right through their operation.

A VC’s bread and butter is ‘deal flow.’ The more potential deals that come through the door, the higher their chances of finding an idea worth investing in. But, if they sign your agreement, it would drastically limit their ability to review or consider ideas that are even remotely similar to yours, which would essentially cut off their deal flow.

(This is a good time to remind you to not even ask a VC to sign your agreement. Chances are, they’ll laugh at you for being so naive. Worse case scenario, though, they actually get ticked off because you basically just asked them to stop making money.)

If you’re still convinced that your product, recipe or idea is so novel that is deserves special attention, consider this.

VC capitalists aren’t building products themselves. Remember, these guys and gals have already done the heavy lifting and they aren’t likely to want to do it again. VC’s and their representative firms are looking for an idea and a team that’s ready to hit the ground running.

In other words, they’re looking to make their money work for them by investing in a company and idea that’s poised for growth and profit RIGHT NOW. They’re not interested in stealing your idea and doing the hard work and time to bring it to fruition.

So, if you’re worried that a VC might steal your precious idea and make it work without you, then you obviously don’t understand venture capitalists; take the time to do a little more research before you step into the ring.

Finally, to really drive the point home, read what Paul Jones, entrepreneur, angel investor and current Chair of the Venture Best Group for Michael Best and Friedrich had to say about entrepreneurs who insist on bringing NDAs to a VC meeting.

What you can do instead

So you can’t bring an NDA to a VC meeting, but you still have some proprietary information that’s totally worthy of protection and privacy.

Fair enough. If your idea and business are worth a hoot, you definitely should have some IP that deserves some special treatment.

Here are a few ideas for protecting that IP instead of throwing down an NDA at your first meeting.

First of all, do your homework and research VC companies before knocking on their doors. Make sure they have a good reputation, good standing, good ratings, and a good track record. If you can’t find anything on them or confirm that they’ve invested in anything successful, common sense should tell you to throw caution to the wind.

Second, many experts suggest using pitch desks. Pitch deck platforms allow information to be easily shared. While this may seem counterintuitive, it actually gives you the advantage of tracking and monitoring who is sharing your ideas and when. If you see suspicious activity, you can simply revoke access and, as a bonus, you have a digital track record of everything that went down.

Finally, keep in mind that a VC doesn’t need to know your secret ingredient in order to be interested. When pitching to a VC, you only need to say enough to whet their whistle – not give them the cow for free.

In other words, share enough about your innovative processes, your outstanding team or proven metrics that speak for themselves to get their attention.

If, and when, a VC is intrigued enough to hear more, they’ll offer a term sheet and then, by all means, whip out that NDA so you can reveal your big secret and seal the deal in confidence.

Credits: Icon investor by Rflor from the Noun Project.

5 Reasons Why Your NDA is Not Enough