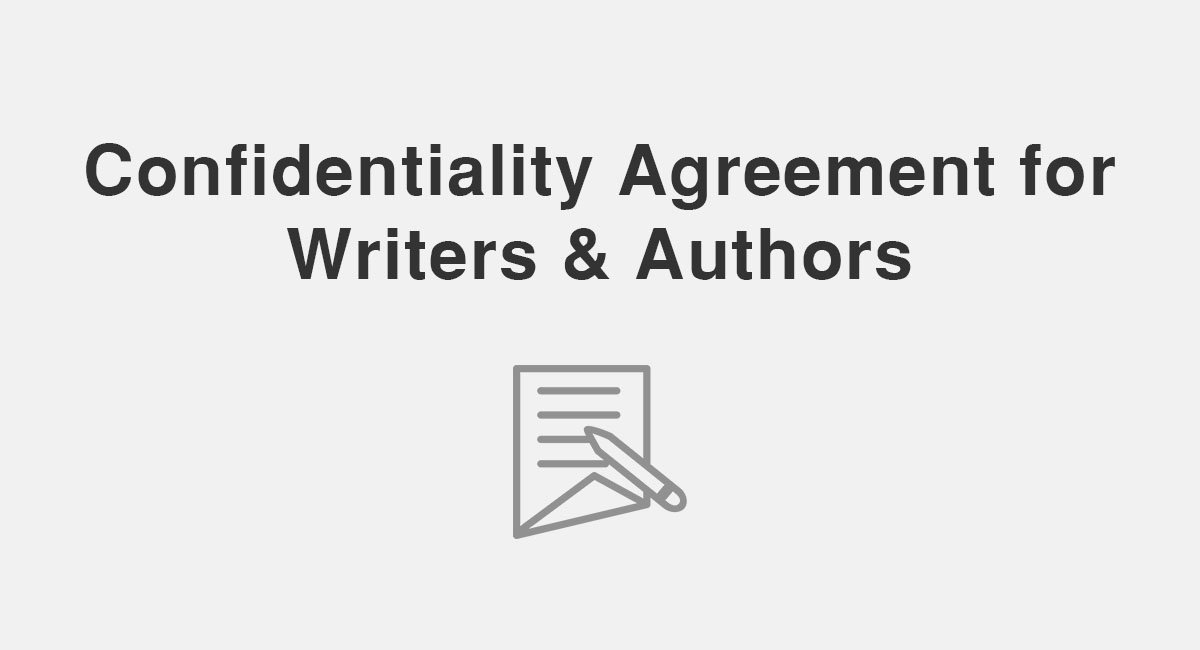 From technology to trade secrets, confidentiality agreements are helping entrepreneurs everywhere to stake their claim and protect their ideas and investments. Writing is a different world than white-collar business, though.

A tight-knit community, many authors are of the opinion that these kind of legal agreements are irrelevant or unnecessary. Opinions tend to be negative, even.

But don’t disregard the confidentiality agreement just yet! Although the writing world is vastly different than business, it’s still a competitive world out there and even writers need to take deliberate steps to protect their hard work.

How you approach and use confidentiality agreements will entirely depend on what you’re writing, though.

Publishers and authors view the subject much differently than that of professional ghostwriters and freelancers.

Confidentiality Agreement for Writers and Authors from EveryNDA

The publishing world views confidentiality agreements much the same as venture capitalists: most won’t agree to sign the agreement and many are likely to be turned off if you even ask them to sign one.

Why? One professional publisher says that confidentiality agreements just aren’t part of the traditional publishing culture.

Publishers and authors really are a tight-knit community and many projects are still completed with a hand-shake type mentality.

Not literally, of course, but the formalities are far fewer than many other industries.

So, the preparing and signing of a confidentiality agreement between parties (the author/writer and the other party) has simply never been mainstream in the professional and amateur publishing industry.

There are always differing opinions though. While many publishers will snub the confidentiality agreement entirely, others are willing to sign a simple (and well-written) one if it makes the author more comfortable.

If you’re an author and you’re ready to approach publishers with your work, do your homework first.

Respectable publishers keep a blog and maintain a good website so you can often find out what they think of these kind of legal agreements before you ever contact them.

If they refuse to sign it, or have an exceptionally negative opinion of them, it’s best to avoid the subject altogether. Trust the process and work with the industry standards.

Sometimes confidentiality is critical, however. Perhaps you performed an exceptional amount of research for your sci-fi opera, historical novel or publishing software and the data and research will be invaluable for future projects or books in the series.

Well, then it just might be worth your extra time and effort to find a publisher who will agree to sign your confidentiality agreement.

They are out there! If confidentiality is a must-have for your novel or other work, then find a publisher who clearly approves of the practice and is willing to take the process seriously.

Some will sign just to sign and may not necessarily understand the implications or take them very seriously.

So it really is better to find a publisher who truly appreciates the concept and wants to protect your hard work.

Most publishers really do want to help an author out, but there are dishonest folks in every industry and you’re entitled to take the safe approach by signing the agreement.

Even when you do find a publisher who’s happy to sign your confidentiality agreements, it’s still important that you keep the agreement simple. Most writers are not, by nature, legal eagles and they prefer to use their wordsmithing skills on other subjects besides legalities.

So, when drafting your agreement, don’t get wordy or complicated.

The following example was taken from a non-disclosure agreement that was drafted for use in an author demonstrating proprietary software.

The agreement is drafted very specifically, to address only those issues that related to the transaction between the author and publisher.

The agreement goes on to include only three other paragraphs:

This sample agreement is straightforward and doesn’t include anything outside the exact scope of the work.

This type of NDA will often make publishers more comfortable with signing it because it doesn’t limit their interaction or agreements with other potential authors.

Ghostwriters draft blogs and articles, ebooks and whitepapers and guides. They create pamphlets and business cards and websites and newsletters. And because all of this content is business related, much of it is proprietary.

Therefore ghostwriters and their clients are much more likely to sign a confidentiality agreement than publishers.

In fact, many freelance writers keep a standard agreement on hand and customize it for each new client. 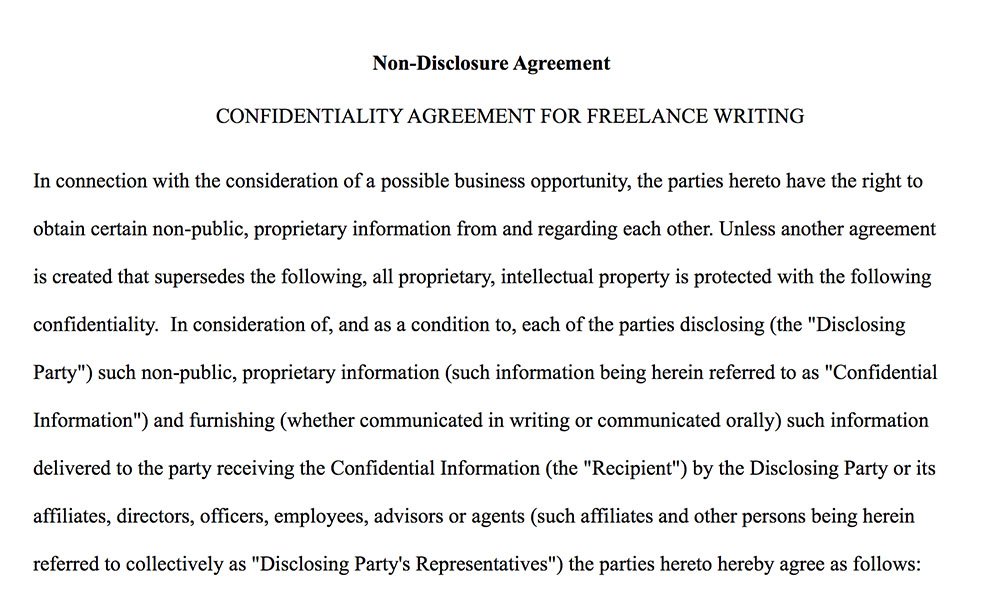 The point is that a standard agreement (customized for each client, of course) is not only commonplace is the ghostwriting profession, but it’s actually encouraged and preferred by writers and clients alike.

It protects everybody’s interest in the agreement and provides some assurance that your proprietary information will maintain its coveted confidential status.

So novel ghostwriters fall somewhere on the fence, it would seem. You’re part of the traditional author and publishing world, which views confidentiality agreements in a rather negatively way, but you’re also a professional ghostwriter, which executes these kind of agreements as a matter of doing regular business.

If you’re ghostwriting a novel or similar work based on an outline, rough draft, table of contents, etc., it’s fair of the author to request that you sign this type of agreement. They are, after all, trusting you with the inner details of their idea.

Remember, ideas can’t be copyrighted and typically it’s very difficult to “steal” a book idea and turn it into your own.

Writing is in the execution and most writers can’t execute a book idea based off a simple description.

However, in the case of a ghostwriter, you’re often privy to some intimate details about how the author perceives the story, character development, plot, etc. so it might be conceivable for you to steal the book idea and write it as your own.

Not that I’m accusing you of doing such things, but I’m trying to help you put yourself in the author’s shoes for a moment. Things happen and it’s fair for the author to want to protect their idea.

So, if you’re a novel ghostwriter and you’re asked to sign a confidentiality agreement, scrutinize it and read it carefully, but don’t be afraid to sign a simple, well-worded agreement.

You could also take the professional approach and keep a standard ghostwriter agreement on file to prepare for each new client. This will show new clients that you’re a true professional and take their work, and yours, very seriously.

The moral of the story is that confidentiality agreements are frowned upon in the traditional publisher/author world, but professional ghostwriters are smart to keep a standard agreement on file for each new project.

And it pays to do your homework.